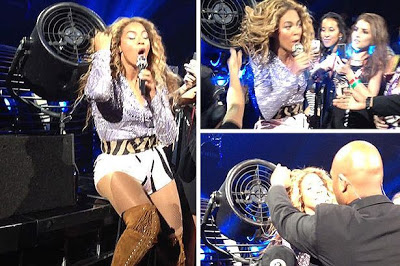 On Monday the 22nd of July, 2013, celebrity singer Beyonce got more than what she bargained for after her long hair extension got stuck in a fan during a live concert for her Mrs Carter World Tour in Montreal city, Quebec, Canada.

During her signature head shaking while performing her hit track ‘hallo’, her hair got caught up in a fan placed behind her.

If not for the quick intervention of two security officers on location, the singer would have stay locked on the spot for hours.

The funny thing is that Beyonce kept on singing as if nothing happened to her.

Few minutes after the show of shame, the singer joked about the whole scenario as if nothing happened.

Her performance is never complete without shaking her head.

Hope this is not a set up.. LOL