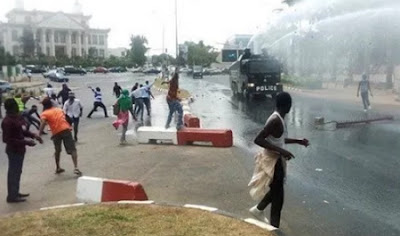 The members of the Islamic Movement in Nigeria (IMN) popularly known as the Shiitees, were said to have had it rough and bloody in Abuja this morning, when they were said to have insisted that their daily sit out protest at the Unity Fountain must continue.

The development was after the Federal Capital Territory (FCT) Police Command had cordoned off the whole area last Friday with crime scene tape banning all manner of protest from taking place.

It was also gathered that their insistence to regain control of the Unity Fountain and go ahead with their peaceful protest against the orders of the police, however, sparked off violence and riot that got many people injured and vehicles smashed.

The daily sit out protest of the Shiites had lasted for over two months at the Unity Fountain, and just a week ago, a new dimension was introduced into the protest, where the protesters March in large numbers that obstruct traffic flows, to different restricted places in Abuja to make a case for the release of their leader.

The Police that had heavily mobilized its officers, Armored Personnel Carriers and security dogs to enforce the ban in the area, while applying force to disperse the rioting protesters by firing tear gas and using hot water tanks against at them.

An eye witness, a taxi driver who ran into the cross fire, but escaped death my whisker, said that the protesters were not dissuaded by the tear gas and the hot water that police was using against them.

He stated that the protesters faced the police, hauling stones and sticks at them, and also smashing vehicles that were around.

“I didn’t know what was happening, but I before I could realize it, I was already in the midst of the protesters with the passengers I was carrying in my car. I hurried reversed my car and escaped from hurt.

“The Shiites faced the police with stones and sticks, in fact it was when the soldiers came that they disappeared, and some of them flew with injuries and blood on their bodies”, he noted.

The protesters had presently been dispersed, but there was heavy presence of Soldiers, Civil Defence Corps, the Police and other plain clothes security agents, who were mounted right from the Federal High Court Junction, to the Nigeria Communication Commission office in Maitaima.

There were also various signs of violence, with canisters of tear gas, stones and sticks, even smashed car glasses along the roads in these areas.