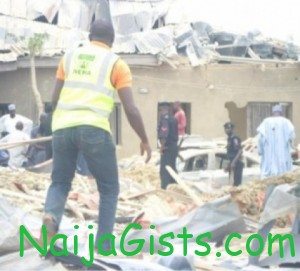 It was a black Independence Day in Maiduguri, the Borno State capital, following a heavy blast believed to have left many dead.

Also in Suleimanti ward and 202 Housing Estate, gunmen suspected to be members of the Boko Haram sect killed seven persons in the early hours of the day.

According to a resident, who gave his name as Hussaini Mallum, the gunmen came to the house at Forestry Quarters at about 2.00 a.m, where they killed three members of the same family and another from the neigbourhood.

He said the whole area was, however, deserted on Monday morning, except for mourners and members of the victims’ families, for fear of arrest by security operatives.

At 202 Housing Estate where three people were killed, residents of the area said the situation in Maiduguri was rather unfortunate.

Attempts to speak with the state Commissioner of Police, Yuguda Abdullahi, as well as the Joint Task Force (JTF) spokesman, Lieutenant-General Sagir Musa, failed at the time of filing this report.

Suspected assailants believed to be on a revenge mission stormed the residence of a prominent member of the vigilance group at Danjibga village, in Tsafe Local Government Area of Zamfara State, Nama ‘ina Danjibga, in the wee hours of Sunday and killed him and his wife.

An eyewitness told the Nigerian Tribune that the assailants, numbering about 10, stormed the house of the deceased around 2.30 a.m.

According to the eyewitness, when the deceased asked for the identities of the hoodlums, they told him that they were visitors who came to deliver a message from a prominent farmer in the area.

Investigations revealed that as soon as he opened the door, they pushed him inside and started beating and hitting him with heavy objects.

“One of the killers took his long knife to cut his throat, but the knife could not penetrate his body. The killers tried to kill him with the objects but they could not,” the eyewitness said.

Sources added that one of the killers then brought out his gun and shot him in the forehead, leaving him dead on the spot, adding that as they were trying to leave the room, the same killer shot his wife on the chest and she also died on the spot.

Their remains, it was gathered, had since been buried according to Islamic rites.

Jos, Plateau State capital, was thrown into confusion in the early hours of Monday, when time bombs planted in a densely populated party of the state capital were detonated by some terrorists.

According to a statement issued by the state police command, signed by the Police Public Relations Officer (PPRO), Abuh Emmanuel, the incident occurred  at Ajayi Street junction, in Jos North Local Government Area of the state, at about 3.00 a.m.

The statement said the suspected terrorists planted the explosive devices within the densely populated area of the city and took cover at a nearby place to detonate them, shortly after they were planted.

It added that the devices had exploded before the police anti-bomb squad arrived at the scene and had damaged some buildings within the area, though no casuality was recorded.

Assistant Inspector-General of Police, Mike Zuokumor, commended members of the public for the way and manner they handled the situation and enjoined them to continue to exhibit such level of understanding without being lawless.

Meanwhile, the early morning explosion did not deter the people of the state capital from trooping to their respective places of worship and other places to mark the Independence anniversary.

The operation took place at a secluded place within the Danmagaji community in Zaria.

A source said members of the JTF exchanged gun fire with the terrorist before he was overpowered in an operation that lasted for about three hours.

Confirming the incident, the state Police Commissionner, Mr Olufemi Adenaike, said the joint security operatives were on top of the situation and had recovered items that would assist in further investigations.

He gave the name of the arrested Boko Haram member as Abdul-Jabbar Abdus-Salam, a native of Okene, Kogi State.

It was a black day for the Anambra State police command as unknown gunmen, on Monday morning, shot and killed two policemen, keeping others on a danger list at Umusiome village, Nkpor, in Idemili North Local Government Area of the state.

Nigerian Tribune gathered that the policemen were attached to the Ogidi police station and were said to be patrolling disputed pieces of land between Abor Akuzor Umusiome and Ogidi Ani, which had been invaded by unidentified gunmen in recent times.

A middle-aged woman, Mrs Ogechi Okechukwu, was reportedly killed at the same place by unidentified gunmen who attacked the village and destroyed a hotel under construction, belonging to Chief Okechukwu Nwafoagu.

Nigerian Tribune gathered that the villages had been on the land dispute for some time, leading to constant patrol by police and military men in the area.