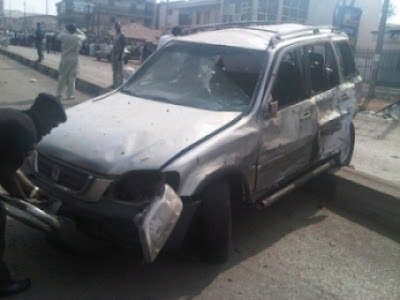 The car conveying the bomb

A terrible bomb blast goes off near a church in Okene, Kogi state today.

We learnt a bomb planted inside a car exploded at the entrance of the Lord’s Chosen church in Obehira area of Okene in Kogi state .

According to officials, an investigation has been launched and 2 Boko Haram members have been arrested.

No casualty was recorded in this blast.

In March 2012, a raid on Boko Haram sect in Kogi led to the death of 9 of the sect members. 2 military men were killed in the raid.