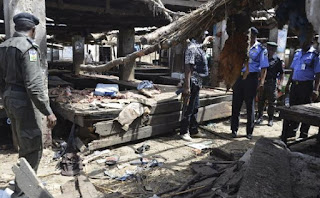 Less than a week after a bomb explosion killed over 20 people at a meat market in Maiduguri, another explosion has rocked the same area.

The latest attack carried out around 3:30pm on Saturday reportedly killed 10 traders.

A member of a Youth vigilante group in the area,  Modu Garga, said the explosion went unnoticed by most residents of the town as it was thought to be a thunderstorm from the heavy rainfall.

The bomb explosion that occurred at the cattle market, popularly known as Kasuwan-Shanu did not draw the attention of the residents of Maiduguri, as many thought its sound was that of a thunderstorm that heralded a heavy downpour in the town.

A soldier said, “There was a bomb attack; it is just that people were really unaware of it due to the rainstorm. Initially, we too thought it was the sound of the thunderstorm.

“One of my colleagues attached to the area later called to inform us that there was a bomb in Kasuwan-Shanu; but I could not get him to give details.”