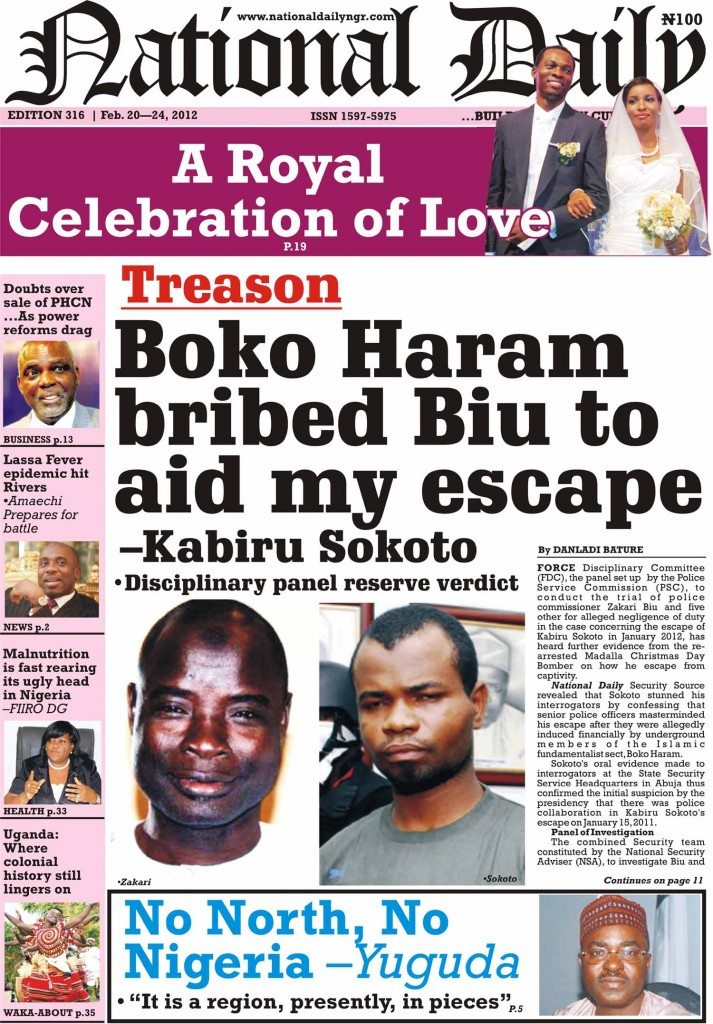 Do you remember Karibu Sokoto stated Nigerian Police Aided his escape few hours ago? After further interrogation, below is what he confessed:

Kabiru Sokoto opened up to interrogators that detained Commissioner of Police, Zakari Biu masterminded his escape after he was allegedly induced financially by underground members of the Islamic fundamentalist sect, Boko Haram. naijagists.com

According to Daily Trust, Kabiru Sokoto’s confession has confirmed the initial suspicion by the presidency that there was police collaboration in Kabiru Sokoto’s escape on January 15, 2011.

Giving an insight into the well-laid escape plan, Sokoto said;

“It was agreed that I will first of all go to Toto in Nasarawa State before moving over to Taraba from where I would than flee to neighboring Cameroun a day before I was captured.”

“After my initial arrest, I know I was in trouble and was desperate to secure my freedom, you know Boko Haram has many police officers among our membership, so my leaders contacted policemen who agreed to facilitate my escape on the understanding the he will be financially rewarded. So, it is a contract for the police to help me escape.”

The detained kingpin also agreed that he, Habibu Bama, Suleiman Gambo aka Babangida, Muhammed and Muhtari Keifanchan were all involved in the conspiracy to Bomb worshippers at St. Theresa’s Catholic Church, Madalla.

During his interrogation, Zakari Biu painted a picture of what happened on the day of Sokoto’s escape;

“We arrested Sokoto and after his arrest, we seized some vital material from him. The materials could have helped us prove his involvement in the Madalla bomb blast. We therefore decided to visit his house in Abaji. About five policemen under my command took him there, Sokoto, was in handcuff. But few poles to the Buttect House where Sokoto lives, we were confronted by some armed youths who pretended to be playing football on the street. They attacked us with gun and other dangerous weapon, while we were trying to engage them, Sokoto escaped into the crowd. We did not want to kill passers-by, that’s why we did not open fire.”

Reacting to Zakari Biu’s claim that the youths in Abaji area of Abuja enabled him to escape, Sokoto said;

“It is not correct, it was the police who contacted my Boko Haram members to come and secured mu released. It was not the youths alone, Boko Haram members were involved, and my group came with a get-away vehicle which took me away as was agreed with the police. I was in the vehicle that detonated the second bomb that exploded on the road, leaving a deep hole and one of my accomplices the drove the vehicle disappeared after my escape.”