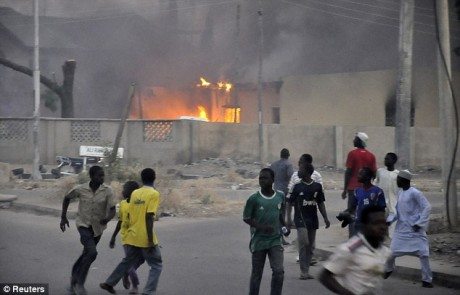 In a small, stone, tin-roof building in Regassa in the northern Nigerian city of Kaduna, in a room whose walls are decorated with slates inscribed with Koranic verses, Adulai, 15, lies on a mat, feverish with malaria and typhoid.

His younger brother Adamu tends to him. ‘He’s very sick’, says Adamu. Adamu has not eaten since the night before. He says he is hoping for some leftovers from a nearby house, where the family is finishing lunch. naijagists.com

Adulai and Adamu are not orphans, but they might as well be. A year ago, their parents, poor farmers with more children than they can afford, took them hundreds of miles from Katsina on the edge of the Sahara to Kaduna to study the Koran in a ramshackle Islamic school called a Tsangaya. They are just two among millions of boys who have made the same journey in similar situations across the country. Communal rooms in this tsangaya host up to 80 boys at night. Thin, straw mats cover the floor. Filthy bags holding modest belongings are nailed high on the grimy walls.

The boys — known as Almajiris — are meant to be under the guidance of mallams, or religious teachers. In reality, when the Almajiris ‘break’ for the day, they stream out in the scores onto the streets armed with small plastic bowls to begin a long day of begging. ‘Almajiri is a Hausa word meaning emigrant’, explains Dr. Khalid Abubakar Aliyu, secretary-general of Jama’atu Nasril Islam, an umbrella Muslim group. ‘It is someone who is searching for knowledge to make himself a better individual. But it has now become a concept of its own in northern Nigeria, synonymous with begging.’

Nigeria’s population of 160 million is roughly split between a mostly Muslim north and a largely Christian south. Absolute poverty — defined as people who can only afford the bare essentials of food, shelter and clothing — rose to 60.9% in 2010 from 54.7% in 2004, according to the National Bureau of Statistics. That inequality is widening. And the majority of the poorest states lie in the dusty, arid north. Add into that destitution a polygamous society that can produce dozens of children in a single family and parents, with little means to feed them, willingly send their offspring to tsangayas, often hundreds of miles away in neighbouring states or even countries.

In cities across northern Nigeria, the scale of the problem is apparent. Young boys swarm around cars stopped in traffic looking for alms or scraps of food. Kids with painful skin diseases and open sores on their heads and hands stare into car windows. Accidents, even fatalities, are common. Dr. Suleiman Shinkfi runs a Kaduna-based NGO helping Almajiris. ‘They are children that assume that they don’t have anybody’, he says. ‘They feed on the roadsides, they rush for your scraps when you finish eating. Sometimes they fight dogs for food.’ Naturally, the children are vulnerable to criminality, says Tayo Fatinikun, state secretary of the Child Protection Network in Sokoto. ‘They are living where they don’t have families. Some are as young as 6 years of age. It is an impetus to criminal activities.’ Arinze Orakwe from the National Agency for the Prohibition of People Trafficking adds: ‘These children are vulnerable to all sorts of social problems — abuse, violence. [They can be] cherry-picked for any vice that adults want to use them for’.

Concern is growing that the Almajiris might also provide fertile recruitment grounds for northern Nigeria’s Islamist militants, Boko Haram. Boko Haram has killed more than 250 people already this year, according to Human Rights Watch, including 138 people in Nigeria’s second city, Kano, in a series of coordinated bomb attacks. (The militants are suspected of helping to stage a prison break in Kano that saw more than a 100 inmates escape on Thursday.)

Almajiris have long been accused of perpetrating violence on behalf of political elites in the north who seek to undermine the southern Christian-led government. Now the suspicion is that they are making easy recruits for Boko Haram. The government is aware of the problem. ‘Borno state, where the [Boko Haram] originated, has some of the worst human development indexes in the country in terms of access to health care, high maternal fatality, high infant mortality, high fertility’, Nigeria’s Finance Minister, Ngozi Okonjo-Iweala, tells TIME. ‘We have to target it. We have to tackle unemployment, poverty and improve social services for vulnerable people’.

The issue of the Almajiris is sensitive, however. Few are prepared to confront the mallams, who yield considerable influence. One, Mallam Abubarkar, who runs a tsangaya in Kaduna, has 17 children from two wives. He feeds his family with farm produce sent to him by his charges’ parents, along with the $1,300-a-year school fees they bring in. Mallam Abubarkar says the almajiris pose no danger. ‘I went through this, I begged on the streets’, he says. ‘All the mallams went through the same process. Islamic doctrine allows for one to seek help and allows one to give help — and almajiris are in this position, asking for help because of God’, Shinkfi says that’s nonsense. ‘Mallams are doing it for business, not in the name of God’, he says.

But still the Almajiris keep coming. Abdul is another. He does not know what age he is or where he’s from. Six years ago, he arrived at the school in Kaduna — he thinks he might have been 4 — where his parents left him. He has not seen them since. He is a child, alone, destitute and easy prey for criminals and militants alike. How many like him will come back to haunt Nigeria in the years to come?  Photo Credit: Reuters