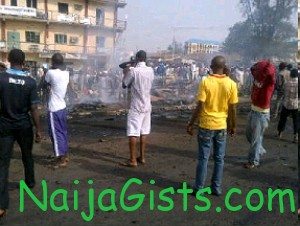 Pope Benedict XV1 desires an end to the brutal violence against Christians as well as churches in Nigeria, however, the attacks remain unchecked.

The most recent suspected Boko Haram attack was carried out on Monday December 24 in a village called Peri close to Potiskum, the capital city of Yobe, the core of Boko Haram deadly attacks..

When Christ-followers in an ECWA church in Peri village gathered to observe Christmas eve, some unknown gunmen attacked them, killing 6 people, along with the pastor, and setting the church ablaze, Peri residents and police disclosed this on Tuesday.

“A group of gunmen came into the village at midnight and went straight to the church… they opened fire on them, killing the pastor and five worshippers. They then set fire to the church,” said Usman Mansir, resident of the village.

Christian Association Of Nigeria in Yobe’s head, Mr Idi Garba mentioned that many worshippers at the ECWA church “are still missing.”

“I have been informed that six bodies have been recovered,” Garba said, adding that some who lived near the church “fled their homes during the attack and it is assumed that they are still hiding in the bush.”

According to residents, the gunmen also burnt several houses around the church.