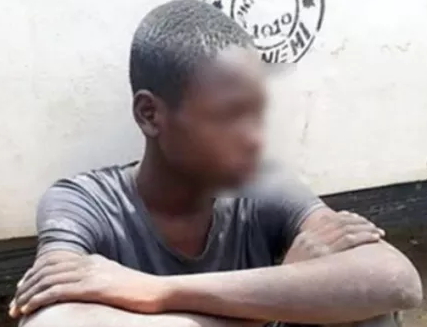 The officials of Abuja Police Command have arrested a prime Boko Haram suspect at Gwako Village in Abuja.

The suspect, 20 year old Seth Yakubu who hails from Obi in Nasarawa state, was arrested at about 11.30 am on Sunday after police received a tip-off on his suspicious behaviour in the village.

According to the FCT Commissioner of Police, Musa Kimo, the suspect while confessing to his membership of Boko Haram said he escaped to the village from Sambisa Forest after their hideout was dislodged by the Nigeria Airforce through a major air-strike about a week ago.

Yakubu, who served as second in command in his beat in the deadly sect, further stated that he left Maiduguri on Friday 21st July 2017 and arrived Gwako village on Saturday 22nd July 2017 at about 10pm to conceal his identity and seek refuge.

The suspect said he was lured into joining the Boko Haram terrorists group by a young man who approached him with a promise of an automatic employment into the Nigerian Army only to end up with the sect group.

He said he was given a form to fill and thinking the job was real, he completed the form only to be taken to an unknown depot where he and some others received training.

Yakubu also confessed that apart from being the second in command in his unit, he actively participated in several deadly attacks launched by the group against innocent citizens.

In the meantime, the FCT Police boss has enjoined residents of the FCT and environs to be vigilant and always report any strange and suspicious person or persons, or activity to the police.

“The Command wishes to also advise community leaders to guard against habouring strangers, especially those whose mission to the community is not clear.