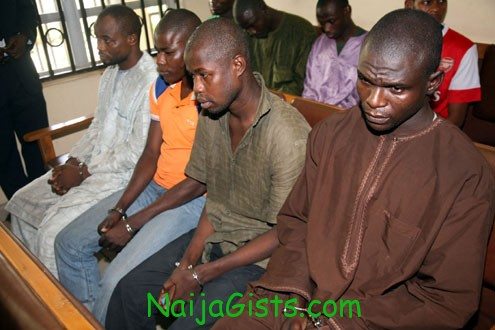 The militant Islamic sect, Boko Haram which has carried out bombings and gun attacks especially in the North Eastern parts of Nigeria and Abuja, the Federal Capital Territory, has begun mass kiliings of Southerners living in the north. naijagists.com

The extremists had issued a three-day ultimatum to Southerners and Christians living in the Northern part of the country to leave or risk being killed. The ultimatum expired yesterday.

The sect was also reacting to declaration of state of emergency in some parts of the country where the sect has been very active.

The state of emergency itself was precipitated by coordinated attacks by the Islamic militant group across some Northern states on Christmas Day which resulted in the death of over 45 Nigerians.

The highest casualty was at St Theresa’s Catholic Church, Madalla, a suburb of Abuja where over 40 worshippers were killed by a suicide bomber as they were leaving after early morning mass.

In reaction to the ultimatum from Boko Haram, Hafiz Ringim, the Inspector General of Police and General Owoye Azazi, the National Security Adiviser, had advised Southerners living in the Northern part of the country to ignore the Boko Haram ultimatum.

They both assured Nigerians of the ability of the security agencies to protect them wherever they choose to live or ply their various trades.

“Nigerians of all tribes and religions should unite to confront this evil. The security agencies, the police, the army have already called on you to completely ignore these threats.

“The government is determined, capable and will never leave any stone unturned to secure the unity of Nigeria against all evil groups.

“Nigerians will not leave (their property to) go anywhere,” Labaran Maku, Nigeria’s minister of information said while also reacting to the ultimatum.

Events of the past 24 hours however did indicate that rather than just that assurance, the security agencies or the Federal Government took no significant measure to stop Boko Haram from carrying out what now looks like a deliberate plan to stoke ethno-religious war in the country.

Reports on Friday indicated that at least 17 traders of mostly Igbo stock were killed by gunmen in Mubi, Adamawa as they gathered for the usual prayer preparatory to the opening of their shops for business.

Just the previous night, gunmen had in a similar fashion attacked a church during a prayer service in neighbouring Gombe state, killing six worshippers and wounding 10.

Another report indicated that two others were killed by gunmen at an hotel in the same city.

Though no one has claimed responsibility for the attacks, the suspicion is that they were carried out by militant group Boko Haram, especially given its earlier notice to Southerners to leave that part of the country.

Meanwhile, while the slaughter of defenceless citizens continue across Northern States, Nigerian security seemed to be more concerned with how to deploy its arsenal against labour and members of the civil society groups gearing to protest against the recent increase in pump price of petrol next Monday! (pm news)