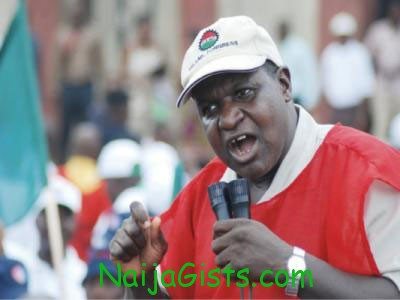 According to pm new report, the Federal Government on Friday at about 5:53 pm secured through an ex-parte motion, an order from the National Industrial Court restraining the Nigeria Labour Congress, NLC, and the Trade Union Congress, TUC, from embarking on a general strike or compelling other Nigerians to embark on a strike action or mass rallies and street protests across Nigeria over the recent removal of fuel subsidy pending the determination of the suit it instituted against the labour bodies. naijagists.com

The 3-man panel of the court led by its President, Justice Babatunde Adejumo, also made an order restraining the NLC and TUC from embarking and or inciting Nigerians to embark on general strikes, rallies or any other action that would be inimical to the economic affairs of the Federal Republic of Nigeria.

It also granted leave to the Federal Government to serve the court documents on the NLC and TUC via substituted means by publishing same in 3 national newspapers.

During the proceedings leading to granting of these orders, the panel was told by the lawyers representing the Federal Government led by Mr. Fabian Ajogwu, a senior advocate of Nigeria, that the magnitude of the strike action being planned by the workers’ bodies is such that would cripple every economic sector of the nation and will cause more hardship on Nigerian citizens.

The lawyer informed the court that the labour bodies, in a joint communique issued at the end of their meeting on 4 January, threatened that from Monday 9 January, all offices, oil production centres, air and seaports, fuel stations, markets, banks, amongst others will be shut down and that the threat created needless anxiety and panic by calling on Nigerians to stockpile basic needs, especially food and water.

Mr. Ajogwu also told the court that the labour bodies also threatened to have a showdown with law enforcement agencies and argued that the call for general strike action was made by the NLC and TUC without any formal declaration of a dispute right relating to labour relations or employee rights.

He further argued that the removal of subsidy on premium motor spirit and the deregulation of the downstream petroleum sector of the Nigerian economy is not a dispute of right of the Nigerian workers.

In granting the orders as sought by the Federal Government, Justice Adejumo averred that the strike action will adversely affect the economy of the nation and noted that section (7)(1)(b) of National Industrial Court Establishment Act of 2006 grants his court the exclusive jurisdiction over the subject matter of the suit.

Furthermore, he stated that the fact that the strike has not commenced brings the matter squarely within the contemplation of the powers of the court and noted that the workers must be restrained from embarking on the strike so as not to compound the nation’s problems.

The court subsequently adjourned hearing into the matter till 23 January,2011.