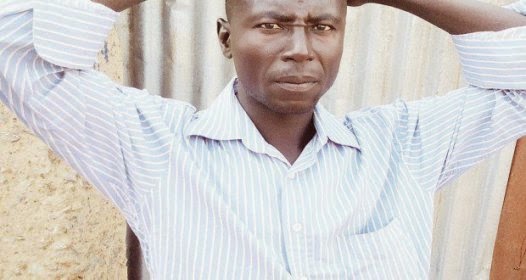 The man pictured above is in pain after his family got displaced or likely murdered by Boko Haram terorrists who attacked his village back in September.

Hear what Mathew Zira told The Nation few hours ago:

“My name is Matthew Zira. I am from Vi village in Minchika Local Government Area, Adamawa State. I was living comfortably with my family until that fateful Friday. Before that day, there had been rumours that Boko Haram would attack the village, but no one knew when they would come. So on that day, as usual, I went out of the house to look for my daily bread. I ride commercial motorcycle in the village, I am also a farmer, and did the commercial motorcycle work when farm work was over.

So, I left home as early as 6 am on the 7th of September 2014 on my motorcycle to commence the business of the day. But at about noon, I started hearing gunshots and everyone said Boko Haram had arrived town. I immediately rushed back home to go and evacuate my family, but before I got home, they had fled along with other villagers to an unknown destination. I went round town looking for them but could not find them. I went to the police station, hospitals and everywhere but could not find them. Before the evening of that day, Boko Haram had already taken over the entire village completely. I was advised not to go back home because all the houses in the village had been razed by Boko Haram. I fled to Minchika to continue the search for my children. Later, we had to flee to Yola when we heard that Boko Haram would attack Minchika. I spent one month in Yola searching everywhere for my children but I could not find them.

Those of us who escaped from Vi village and other surrounding villages were camped at the NYSC camp in Yola. I thought of meeting my children there in the camp but they were not there. I had to come to Jos because I was told that thousands of Adamawa people ran to Jos. But I have searched all the IDP camps in Jos since the 5th of November when I arrived, I can’t still find them. There is even no iota of information about where I could find them. “Others who lost their families during the rush to escape have found their people, but in my own case, I’m still searching in vain. It is only God that will reveal to me what happened to my family.

So, I am only looking up to God now because I have done all that is humanly possible. I am really in trauma; at night I can’t sleep, I keep thinking of my children. At times, if I am eating and the thought of the whereabouts of my children came to my mind, I will not be able to eat any longer, from that moment I will lose appetite. I am pleading with any Nigerian who knows where I can locate my children to contact me on my phone – 07037728905.

My wife’s name is Tinana Mathew. My seven children are Rita, Ziramatu, Tumbamatu, Kwata, Racheal and one-year-old Doris. Please, I am eagerly waiting for any information on their whereabouts.”

Heya! What a poor man. Boko Haram has caused a lot of havoc to Nigerians.