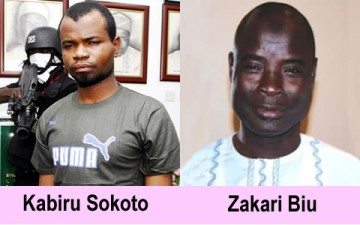 Biu was in charge of the investigations launched by the police after Sokoto, the alleged mastermind of the bombing of a church in Niger State, was first arrested.

The meeting between the two, a security source confided in one of our correspondents, would enable the investigators to determine if Biu’s testimony on how Sokoto escaped was true or not.

Already, the plan is said to be the source of anxiety among officers and the rank and file in the police headquarters in Abuja as many have realized that revelations from the encounter between Biu and Sokoto may implicate some police officers.

“Since Friday, there has been this concern here that the suspect may open a can of worms and Boko Haram sympathizers in the security circles may be named. This is why we have beefed up security round the suspect,” a senior security official confided in one of our correspondents on the condition of anonymity.

He had been initially arrested on January 13 at the Borno State Governor’s Lodge, Asokoro, Abuja, but escaped in Abaji while he was being taken to his residence for a search.

A top security source told reporters on Sunday in Abuja that Sokoto would be brought before Biu to corroborate or deny the latter’s account of the January 15 escape.

The source said, “We will bring Sokoto before Biu to either deny or corroborate what the police officer said. We are happy that he was re-arrested before the conclusion of Biu’s interrogation; though he (Biu) had written some statements on the circumstances that surrounded Sokoto’s escape. It is good that we have the man himself (Sokoto) around now to either disagree or agree with Biu before the conclusion of his case.

“Also, he would tell us if he had any link with the former Inspector-General of Police, Mr. Hafiz Ringim, as well.  We expect him to cooperate with security agents.”

President Goodluck Jonathan had fired the then Inspector-General of Police, Mr. Halfiz Ringim, for the escape of the alleged terrorist. Before then, a senior Boko Haram member had granted an interview where he said he was well known to Ringim and that he had given advance warnings to the police prior to some of the bombings carried out by the sect.

The officer said, “Many police officers are afraid that Sokoto who is under serious interrogation by the State Security Service may open a can of worms that could jeopardise the career and future of many security officers.

“Sokoto may expose their connivance with the sect. We all know that there is no way he could have escaped in handcuffs from five armed policemen without collusion in high places.”

Before the escape, there were strong suspicions in government circles that the sect had infiltrated security services, particularly the police force.

A flight officer was arrested with Sokoto on January 13 at  the Borno Governor’s Lodge. A serving Senator, Alli Udume, is also currently undergoing  trial at the Federal High Court  over alleged involvement with Boko haram.

Besides Sokoto’s easy escape under custody, two police identity cards retrieved from a Boko Haram armoury in Kano by security operatives that raided the location, further fuelled speculation of the sect’s infiltration of the police.

We learnt that the ongoing interrogations of Sokoto and the sect’s spokesman, Abu Qaqa, were aimed at revealing the leaders of the militant groups and their sympathizers in the security circles.

Efforts to get the Borno State Commissioner for Information and Home Affairs, Mr. Inu Bwala, to comment on the re-arrest of Sokoto did not succeed. He did not pick the calls made to his mobile telephone or respond to an SMS sent to him.

Some media reports indicated that Sokoto’s phone showed that he had links with top politicians and prominent individuals in the country.

Jonathan had on January 8 expressed deep concerns about the activities of the Boko Haram sect, stressing that its members had infiltrated his government and security agencies.