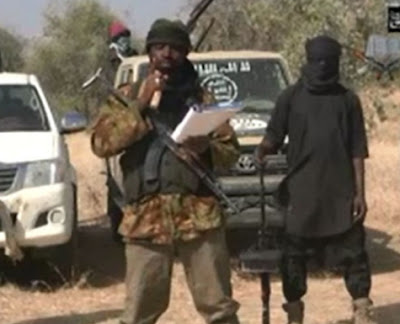 Boko Haram is re-inventing itself again. From its inception as a rag-tag group of area boys and ex-political thugs, bent on creating mayhem, allegedly created by Northern politicians, Boko Haram has grown in strength and numbers of the years, recently aligning itself with Al Qaeda and ISIS, to become a terrorist organisation to be reckoned with.

The good news, now, is that they will no longer be killing their fellow Muslims even though they are going to carry on killing Christians and any other infidels.

Their seems to be a leadership tussle going on within the group with ISIS-sponsored Abu Musab al-Barnawi claiming to be leader and Abubakar Shekau claiming the same. Hopefully they will kill each other and their followers will disband.

According to their new sponsors, ISIS, Shekau has got it all wrong. During a jihad, which they are supposedly fighting, you’re only supposed to kill the infidels – and not Muslims (- even though in Syria and Iraq that’s all ISIS seems to do!). As a result ISIS has appointed the former spokesman Barnawi to head the sect on the condition he’s not allowed to kill Muslims.

Enraged at this decision, made behind his back, Shekau has released statements and made broadcasts to say he’s still in command of Boko Haram – which means the indiscriminate killing of Christians and Muslims will carry on.

Ever since Boko Haram pledged its allegiance to the ISIS Caliphate, effectively becoming its West African affiliate, ISIS has had a say in how the sect conducts its activities considering the fact they maybe funding them and providing technical assistance – providing weapons & training, finance and logistical support. This will also mean that Boko Haram is subject to the orders of Abu Bakr al-Baghdad the head of ISIS. Shekau has run the sect since 2009 and it seems his activities have not gone down well with the ISIS high command hence the reason for a leader change.

You can’t have two Kings or leaders in the same car because there will be conflict of interest and command. Loyalties will be divided and morale will drop. So there’s a leadership contest going on right now and knowing Boko Haram it’ll be a bloody one with only one winner emerging, alive, and the other one dead!

Battling for leadership and supremacy means the Boko Haram hierarchy will be split down the middle and there will be a lot of in-fighting.

Now Sambisa forest might be a very big forest but I don’t think it will be big enough to contain the two warring factions Of Shekau and his followers versus Barnawi and his followers as they battle it out. New video emerging of the surviving kidnapped Chibok girls is a clear indication that the sect is weakening and willing to negotiate – hopefully they will surrender and disband.

The overall good news is that while they are busy fighting amongst themselves it reduces their ability to function as a terrorist group meaning they will carry out less raids. Strategically with the overall Boko Haram command descending into chaos it will make the job of the Nigerian Army a lot easier to contain them and destroy them.