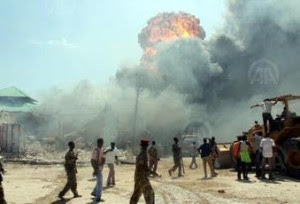 16 people died in the early hours of today when a suicide bomber detonated his explosive around Buhari Housing Estate and Ministry of Housing quarters in Damaturu, the capital of Yobe state.

The attack reportedly took place at a mosque inside the estate.

It was organized by 3 young boys.

Another source said the suicide bomber came near the mosque, hugged one of the boys around and blew up himself and others at the scene.

The attack injured 10 others.