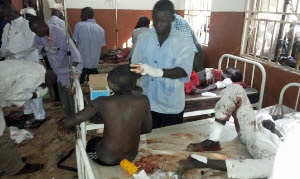 The suspect who was shouting Sai Buhari while dancing reportedly caught the attention of a huge crowd who gathered around him to see the reason for his excitement.

Around 11:30am, the suicide bomber detonated the IED strapped on his body,killing himself and 4 others. 8 other onlookers sustained serious injuries.

Borno State Police Commissioner, Aderemi Opadokun who confirmed the attack said policemen have been sent to the area of the evacuate the corpses.