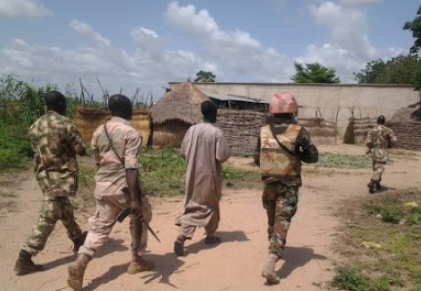 A Boko Haram terrorist has been remanded in prison custody for allegedly killing a policeman in Ekiti.

The self-confessed member of Boko Haram sect identified, Abdulsalam Adinoyi, has been remanded by an Ado-Ekiti Magistrate Court for allegedly killing a policeman on duty.

Abdulsalam,36, is standing trial for killing Sergeant GanaJiya, while on lawful duty in Oye-Ekiti at about 11.00 pm on February 2.

According to the Police Prosecutor, Mr. Oriyomi Akinwale, the accused is facing a three-count charge of murder, terrorism and armed robbery.

The prosecutor told the court that the accused, while under interrogation, confessed to the Police that he was involved in many attacks carried out by the Boko Haram sect in Kogi State in which many people were killed.

The offence allegedly committed by the suspect contravened Section 11 and 12 of Ekiti State Kidnap and Terrorism Law, Section 319 of the Criminal Code Cap and Section 1(2)(a)(b) of Robbery and Fire Arms (Prohibition Act) Cap R4 Laws of the Federation.‎

Counsel to the accused, Mr. Busuyi Ayorinde, applied for the bail of the accused, but the court turned down his application.

The Magistrate, Mrs. Dupe Afeniforo, ordered that the accused be remanded pending legal advice from the Directorate of Public Prosecution (DPP).

‎She adjourned the case until March 26 for hearing.