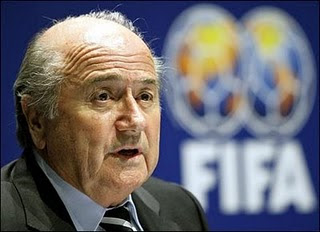 President of the world football governing body, FIFA, Joseph Sepp Blatter, has congratulated Nigeria for being the first African nation to qualify for the Brazil 2014 World Cup.

The Super Eagles of Nigeria secured the ticket for the World Cup Saturday after defeating visitors, Walya Ibex of Ethiopia 2-0 thus securing a 4-1 aggregate victory in the two legged qualifying playoff.

A first half penalty goal from Liverpool of England star, Victor Moses and a second half free kick curled out of the reach of Ethiopia’s goalkeeper Sesay Bancha by Lokomotiv Moscow attacker Victor Obinna ensured that the Nigerian team picked their fifth ticket to play at the 2014 World Cup in a crucial match played at the U.J Eusene Stadium, Calabar, Cross River State.

Stephen Keshi’s team were favourites going into the second leg of the World Cup playoff against the Ethiopians in Calabar on Saturday and it was not a surprise to many football pundits that the Eagles could have an easy ride over their visitors in the match.

Even coach Bishaw Sewnet congratulated Keshi after the match saying “I congratulate Keshi, his team and the people of Nigeria for going to the World Cup. Although I’m not totally satisfied with some decisions of the centre referee (Gambian Bakary Papa Gassam) in the match for denying my team two penalties that could have changed the outcome of this match, I still have to give kudos to the Nigerian team for picking the World Cup ticket.”

Sewnet also heaped praises on his young team who he said are mainly players from the local scene in Ethiopian football.

“These boys have great future ahead of them. They came out strongly to give the Eagles who paraded players playing professional football in Europe a good fight,” said Sewnet.