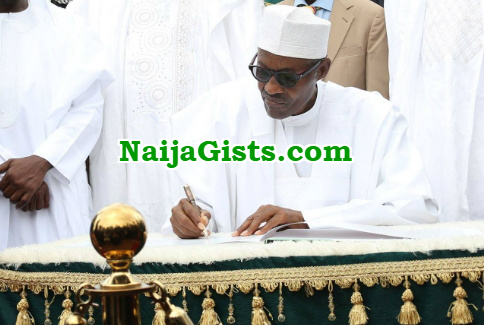 ADP, The Action Democratic Party (ADP) has slammed President Buhari over his recent appointment of about 7 dead people and foreigners into boards of federal parastatals.

In a statement made available to newsmen by its ADP Lagos spokesman, Prince Adelaja Adeoye on Sunday in Lagos, he posited that “it is rather too shameful and very awful that a country of over 180 million people is being led by a man who constantly brings embarrassment to them both locally and internationally.”

ADP said, Buhari is a President who lacks the soundness of mind to lead the country and that it’s rather too bad that in a country with able young men and women, Buhari can only turn to the dead for appointments. The party stressed further that it won’t be a surprise if one day, because of Buhari’s continuous gaffes, he commits Nigeria into something that will have far reaching negative effects on the citizenry. The party believes that a leader must have the presence of mind in the carrying out of his official duties.

The party noted that this is the same disgraceful manner at which Buhari went to London to shame and call Nigerians criminals that engaged in drugs and human trafficking. The ADP spokesperson says that the country does not need a President in the mould of Buhari ever again if the country must progress.

“In a swift reaction from the Presidency, Garba Shehu had said the list had been prepared since over two years ago. This means that the President signs documents without vetting them. This same President condoled with the families of some of these men when they died some time ago or does it mean that he has forgotten?” he queried.

The party observed that it is not just about dead men on the list but that there were some duplication of names and most interestingly, Deborah Iliyas who is the Congo DR. Ambassador to Nigeria also had her name penned down as the Chair of the Nigerian College of Aviation Technology.

Apparently, our government now appoints foreigners to head boards in our country. The party said that if the Presidency cannot handle mundane things like list compilation, it wonders how it will handle sensitive matters.

Continue Reading
You may also like...
Related Topics:appoint, Buhari, foreigners