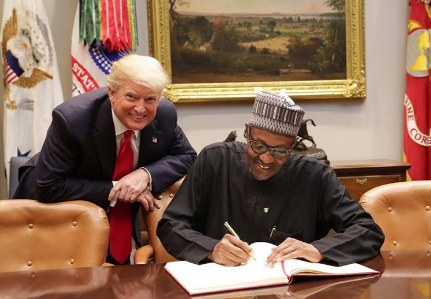 Official Press statement by the PDP party on Buhari’s seemingly successful visit to the US.

The Peoples Democratic Party (PDP) alerts Nigerians and the international community of plans by the Presidency to once more, deceive the public by releasing imaginary and fictitious investments and economic opportunities as gains from President Muhammadu Buhari’s visit to the United States.

Our investigation revealed that part of the scheme is to inject extraneous issues in their account of interaction between President Buhari and President Donald Trump in order to arrive at a predetermined impression of a successful state visit.

This includes presenting President Trump with false performance indices and claiming that the US President endorsed the Buhari administration’s imaginary economic direction, its discredited anti-corruption war as well as the failed handling of security in the country.

This is in addition to bogus claims of imaginary deals sealed with certain investors to bring in huge investments into Nigeria, a practice that has become a pattern whenever the President goes on official visit abroad.

We invite Nigerians to note that the Presidency had always claimed to attract huge investments, the latest being claims of a $15 billion investment during the 2018 Commonwealth Head of Government Meeting (CHOGM), whereas no sign of such investments have come to our country.

Furthermore, we are aware that in line with this scheme, a particular cabinet minister has, since last week, been moving around media houses and other interests in the United States with a view to procuring, swaying and lobbying for endorsements for President Buhari.

We note that the issue of governance by falsehood and procured endorsements in the past three years has led our nation into the present predicament in all sectors.

As we move towards 2019, it is imperative that Nigerians are not fed with fake performance indices, whereas the market dynamics and reality on ground show the contrary.

We therefore charge the Presidency and the All Progressives Congress (APC) to shed their proclivity for propaganda as government by falsehood cannot yield any dividend to the people.