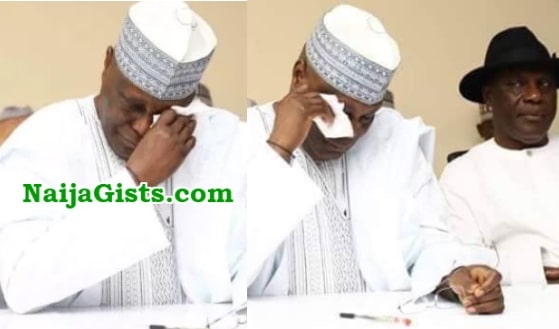 The Presidential Election Petition Tribunal sitting in Abuja yesterday turned down the request of the Presidential candidate of the Peoples Democratic Party (PDP), Alhaji Atiku Abubakar, for access to scan and conduct forensic audit on all the electoral materials, including technology used in the conduct of the February 23 election.

The three-man panel of the tribunal, led by Justice Abdul Aboki, held that scanning and forensic examination of electoral materials by experts were not permissible, adding that those steps were not captured in Section 151 of the Electoral Act, 2010 as amended.

However, the tribunal ordered the Independent National Electoral Commission (INEC) to allow Atiku and his party to inspect electoral materials used for the election.

It held that INEC should allow the applicant’s legal team access to the election materials and obtain their Certified True Copies.

Atiku had approached the tribunal for an order to allow him have access to the election materials used for the conduct of the Presidential election.

At about 1p.m. yesterday, the tribunal began hearing in the motion ex-parte the PDP and its candidate filed to compel INEC to surrender all the materials that were used for the February 23 presidential election, for inspection.

In the motion ex-parte dated March 4, Atiku and the PDP applied for leave of the tribunal to allow them to inspect the voters’ register, the Smart Card Reader machines, ballot papers and other vital documents that were used in the conduct of the presidential election.

They also prayed the tribunal to compel INEC to allow their agents to scan and make photocopies of vital documents used in the conduct of the election, for the purpose of establishing alleged irregularities.

Earlier, PDP and Atiku gave reasons why they applied for an order to compel INEC to surrender all the materials used for the February 23 presidential election, for inspection.

Arguing through his counsel, Chris Uche (SAN), Atiku said the request was to establish that the exercise was fraught with manifest irregularities, including multiple thumb printing of ballot papers, saying he intends to engage forensic experts to analyse the election materials.

Consequently, he prayed the Presidential Election Petition Tribunal for leave to be allowed to obtain some of the sensitive materials that INEC deployed for the presidential election.

Meantime, the tribunal stood down its proceedings for one hour to enable it to consider the merit or otherwise of the request.

Uche told the tribunal that the motion dated March 4, was brought pursuant to section 6(6) of the 1999 Constitution, as amended and section 151 of the Electoral Act, sought for six reliefs, among which included an order compelling INEC to surrender all the sensitive materials that were used for the presidential poll, for forensic scrutiny.

Among the items he said his client wants to be inspected by forensic experts, include over 80 million ballot papers that were used for the election, which he said would be subjected to thumb print analysis.

Other items the motion is asking the electoral body to release to the intending petitioners for scrutiny are the voters’ register, the Smart Card Reader machines, as well as information stored in INEC’s back-up server.

He said the first prayer in the motion paper was for leave of the tribunal permitting Atiku and the PDP to file the action before the pre-hearing session of the tribunal, as prescribed by the Electoral Act.

The applicants (Atiku and PDP) urged the tribunal to direct INEC to allow their agents to scan and make photocopies of vital documents used in the conduct of the election, for the purpose of establishing manifest irregularities they said led to President Muhammadu Buhari’s emergence as the winner of the presidential election.

They maintained that the six reliefs sought against INEC were for the purpose of filing and maintaining an election petition they intend to lodge against the outcome of the 2019 Presidential election.

Uche submitted that his clients decided to approach the tribunal with the motion, in view of the fact that the Electoral Act stipulated that filing of the petition must not exceed 21 days after the election result was announced.

“Because of the limited time, the Applicants, who intend to file a petition, want to go and inspect, to be able to secure some of the documents that will be relied upon to maintain the petition.

“We are urging Your Lordships to grant us these orders so that if we are inspecting, we can make copies by way of scanning or photocopying.

“The entire process will be conducted in the presence of INEC officials, and even the Respondents if they so wish,” Uche submitted.

However, the tribunal Chairman, Justice Aboki queried Uche on why his clients would not simply apply to be issued with Certified True Copies of the requested items, and if the extant electoral law permits a litigant to scan election materials.

The tribunal panel stressed that opinion of forensic experts may not be admissible in evidence under the existing Electoral Act which it said specifically okayed the admittance of certified documents.

A member of the panel, Justice Emmanuel Agim, noted that some of the requests by Atiku and the PDP were “outside the precincts of Section 151 of the Electoral Act”.

However, in his reply, Uche argued that the court had, in a plethora of decided cases, held that the sort of evidence his clients are seeking to secure, could be admitted if it were obtained with the leave of court.

He said it would be practically impossible for INEC to certify over 80 million ballot papers that were used in over 172,000 polling units in the country where the presidential election took place.

According to Uche, with leave of the tribunal, forensic experts would be brought to testify and give evidence during the eventual hearing of the petition.

“My lords, if they are not allowed to secure the evidence and testify, it will deprive us of the ability to identify those abnormalities when we find them.

“Besides, if one individual thumb-printed over 500 ballot papers, the certified copies cannot reveal it. That is why we want to scan them and send for expert analysis.

“That is why we need INEC to allow us access to scan the required documents. Going by section 72 of the Electoral Act, all the materials are in the custody of INEC.

“The information we want to go is just to help us to package our complaint, at the end of the day, INEC will also have the opportunity to confirm the authenticity or otherwise of any of the items we tender in evidence before the tribunal.

“In essence, my lord, no one will be prejudiced if our requests are granted.

“We make this application, knowing the very limited time and very disadvantaged position of any petitioner so far as gaining access to the election infrastructure is concerned,” Uche added.

After it had listened to the motion, the panel stood down for one hour to deliver its ruling, even as directed Atiku’s counsel to supply it with the said court decisions that allowed the grant the reliefs sought by the Applicants.

The motion ex-parte motion was supported with a 12-paragraph affidavit that was deposed to by Col. Austin Akobundu (rtd.), the Director of Contact and Mobilization of the Atiku Abubakar Presidential Campaign Council.

Cited as 1st to 3rd Respondents in the matter are the INEC, President Muhammadu Buhari and the All Progressives Congress (APC).