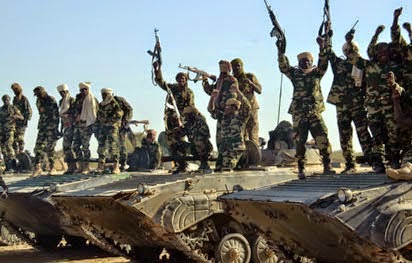 Soldiers from Chad killed 207 Boko Haram militants in fight­ing on Tuesday near a Ni­gerian town close to the border with Cameroon, Chad’s army announced in a statement.

One Chadian soldier was killed and another nine were wounded in the clashes near Gambaru, the scene of regu­lar attacks by the militants in recent months.

There was no immedi­ate independent verification of the Chadian army’s an­nouncement, according to Reuters. Chad’s military also claimed to have seized large quantities of small arms and ammunition and two pick-up trucks.

Meanwhile, food aid has started flowing to thousands of refugees on the border between Niger and Nigeria, the World Food Programme (WFP) said yesterday, ending a suspension of deliveries by humanitarian groups because they feared attacks by Boko Haram.

Some 3,000 people were expected to receive food aid from the WFP yesterday. Humanitarian work was sus­pended earlier this month along some stretches of the border between the two west African nations. “In the camps, there is a lack of ac­cess to basic services, a lack of food and clean water,” WFP official Adel Sarkozi told the Thomson Reuters Foundation.

“We are very concerned about the status of the newly arrived women and children.” Many of the refugees are scattered in remote areas. Ni­ger was facing a hunger crisis even before the latest influx of refugees, with an acute malnutrition rate of 23.5 per­cent of its 17 million popu­lation, above the emergency threshold of 15 percent, ac­cording to a November as­sessment.