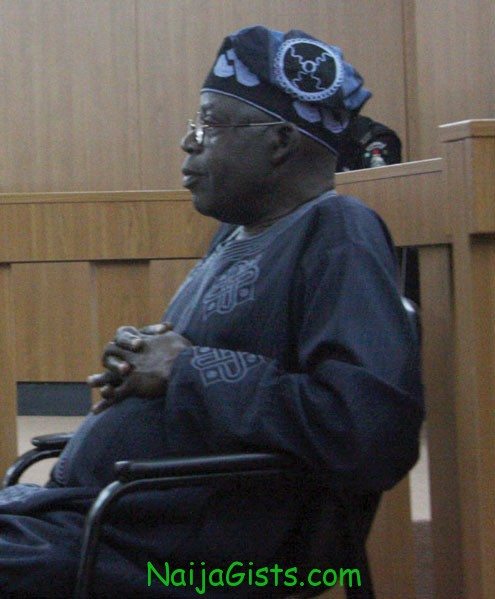 Tinubu in the dock during his first appearance at the tribunal

Nov 30, 2011 – Charges Against Bola Tinubu Dismissed: Blames FG For Not Complying With The Law

In its ruling this morning, the tribunal maintained that the charge did not comply with the provisions of the Act which demands that an accused person should be invited and confronted with allegations against him or her for an opportunity for such an accused person to make a written admission or denial of the allegations before the matter can be transferred to the tribunal for adjudication.

In the course of the trial, the former Lagos State governor had complained to the tribunal that he was neither invited nor summoned by the Code of Conduct Bureau as it did to other governors, to come and make a written admission or denial of the allegations against him.

In agreeing with the former governor, the tribunal held that the provisions of Section 3(d) of the Act is a condition precedent which must be complied with before the tribunal will become vested with jurisdiction to try an accused person.

The tribunal blasted the Federal Government for flouting the provision which the lawmakers inserted in the Act with the intention to avoid overcrowding the tribunal with cases which would have been resolved upon the invitation of an accused person by the Code of Conduct Bureau.

He dismissed the submissions of the Federal Government that it invited Tinubu severally to the bureau without success and noted that there is no evidence before the tribunal to support the claims that Tinubu was ever invited by the Code of Conduct Bureau to make a written admission or denial of the allegations against him before he was dragged to the tribunal.

It also held that there was no summary proof of evidence attached to the amended three-count charge upon which Tinubu is standing trial. naijagists.com

Consequently, the tribunal quashed the charges brought against the former Lagos State governor and dismissed them.

Tinubu was arraigned before the tribunal on 21 September over allegations of operating foreign accounts while in office as Lagos State governor.

His counsel made up of 10 Senior Advocates of Nigeria and 21 other lawyers objected the efforts of the prosecution led by Mr. Alex Izinyon, SAN, to substitute the one-count charge with a fresh three-count charge.

Addressing reporters after the sitting, Tinubu described his case as political persecution and challenged his accusers to bring proof of his foreign accounts, if they had any.

“They said I operated foreign accounts, they have not shown me statements of account, they are yet to provide information.” (Nnamdi Felix/Abuja)