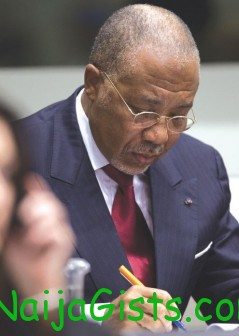 “The trial chamber unanimously sentences you to a single term of imprisonment for 50 years on all counts,” said Special Court for Sierra Leone judge Richard Lussick at the court based just outside The Hague.

The sentencing which began 0900 GMT before judges of the Special Court for Sierra Leone, situated just outside The Hague, marked the first time a former head of state will be sentenced by a world court since the Nazi trials at Nuremberg in 1946.

Brenda Hollis, the tribunal’s chief prosecutor, earlier this month argued for 80-year prison sentence for Taylor, once one of the most powerful men in west Africa and a driving force behind Sierra Leone’s brutal 1991-2001 civil war.

The former Liberian president was convicted on April 26 on 11 counts of war crimes and crimes against humanity for aiding and abetting Sierra Leone’s Revolutionary United Front (RUF) rebels and their allies during the war, in which 120,000 lives were lost.

In return, the court said, Taylor was paid in diamonds mined by slave labour in areas under the control of rebels who murdered, raped and kept sex slaves while hacking off limbs and forcing children under 15 to fight for them.

Should Taylor, 64, get jail time, it will be served in a British prison. The court’s judges cannot impose a life sentence, only a specific number of years.

“The gravity of the crimes is the litmus test” on how they should determine a sentence, Hollis told judges two weeks ago as she presented arguments ahead of the sentencing.

Taylor’s lawyer Courtenay Griffiths told the court the 80 years sought by the prosecution in effect amounted to a life sentence.

“To sentence a 64-year-old man to 80 years is a guarantee that he will die in prison,” Griffiths said at the same May 16 hearing.

He argued that Taylor, Liberia’s president from 1997 to 2003, was instrumental in efforts to bring an end to Sierra Leone’s war. In perhaps his last stand before a world audience, a bespectacled Taylor expressed his “sadness and deepest sympathy for the atrocities and crimes suffered by individuals and families in Sierra Leone.”

But he told judges he was not responsible for the crimes committed by rebel forces and blamed “politics” and the United States for his eventual removal from west Africa to face prosecution.

Both sides will have two weeks after sentencing to file an appeal.

Taylor’s trial, which lasted nearly four years, wrapped up in March 2011 at the court, based in the leafy Leidschendam suburb a few kilometres outside the city.

It saw a number of high-profile witnesses testify, including supermodel Naomi Campbell, who told of a gift of “dirty diamonds” she received at a charity ball hosted in 1997 by then-South African president Nelson Mandela.

Handing down the verdict last month, Judge Richard Lussick stressed that although Taylor had substantial influence over the RUF, including its feared leader Foday Sankoh, his role “fell short of command and control” of rebel forces.

Sankoh died in 2003 before he could face trial.

Authorities in Nigeria arrested Taylor in March 2006 as he tried to flee from exile after being forced to quit Liberia three years earlier, under international pressure to end that country’s own civil war.

He was transferred to The Hague in mid-2006 amid fears that a trial in Sierra Leone would create a security risk.

Taylor’s sentencing comes 66 years after admiral Karl Donitz was sentenced to 10 years in prison by an international military tribunal at Nuremberg for his part in Nazi crimes during World War II.

Adolf Hitler appointed Donitz his successor shortly before committing suicide in Berlin in 1945..