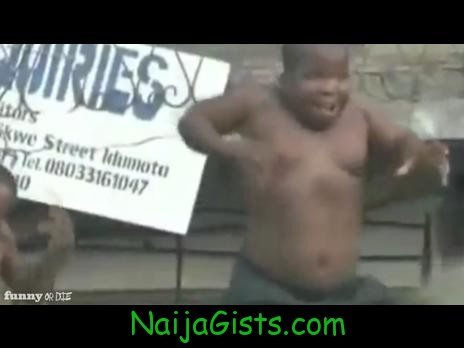 Mrs Folake watched embarrassingly as her son, Chijioke, tried with obvious difficulty to play with his peers. A group of boys, about seven of them swarmed excitedly around a slide, making hasty steps up the ladder and screaming excitedly as they slid down.

Then it was Chijioke’s turn.

The plastic slide shook dangerously as he made clumsy steps up the ladder. Then he reached the top, swung his legs over with much difficulty and let herself go. Folake almost thought her son made it until there was a loud crack. Her worst fear had been relieved. The slide gave in somewhere at the bottom as some part of it broke off. With tears running down her cheeks, Chijioke went over to his mother, followed by jeers from the other kids.

At the age of nine, he weighed 70kg and his waist was 36 inches thick.

Obesity Around the World

Obesity among children has reached epidemic proportions in many countries. The World Health Organization says that worldwide, an estimated 22 million children under the age of five are overweight.

Research and studies have shown that our children are getting fatter by the day. Many families all over America are struggling to keep the weight of their children within reasonable limits. In the last three decades, obesity in children aged 6 to 11 has more than tripled in the United States. About a third of American children are overweight and one-fifth are obese.

A national survey in Spain revealed that 1 out of every 3 children is either overweight or obese. In just ten years (1985-1995), childhood obesity tripled in Australia. Childhood obesity is also extending to developing countries. According to the International Obesity Task Force, in some parts of Africa, more children are affected by obesity than by malnutrition. In 2007, Mexico occupied second place in the world, behind the United States, for childhood obesity. It is said that in Mexico City alone, 70 percent of the children and adolescents are either overweight or obese. While there are no relevant statistics for Nigeria with regards to obesity in children, it cannot be ignored that it is growing at an alarming rate.

According to a Pediatrician, Dr Dele Jokotola, “the health risks caused by obesity in children of this generation are more than ever before. If care is not taken, parents would begin to outlive their children.”

Obesity comes with a number of health risks that causes serious problems for children. There is an increase in the number of children diagnosed with high blood pressure around the world. High blood pressure in children used to be relatively rare. Looking at historical data, only a small percentage of children have suffered from this disease. Recently, though, these numbers have started to change, and a growing number of young people are diagnosed with hypertension every year.

Obese children as young as 10 have the arteries of 45-year-olds and other heart abnormalities that greatly raise their risk of heart disease. Results from a study led by Dr. Geetha Raghuveer of Children’s Hospital in Kansas City on 70 children aged 10-16 showed that almost all had abnormal cholesterol and many were obese. The kids’ “vascular age” was about 30 years older than their actual age, she found

“As the old saying goes, you’re as old as your arteries are,” said Dr. Raghuveer. “This is a wake-up call.”

Aside from heart problems, obesity has been linked to diabetes, cancer, renal disorder or hemorrhage. Obesity is a major factor that reduces life expectancy.

Fat people complain of severe pain in the feet or soles which are crushed under the weight of their heavy bodies. Fat persons also suffer from flat feet. Similarly, weight bearing joints like the ankles, hips and the spinal cord are also strained constantly on account of the heavy weight they have to carry. Consequently, they are susceptible to degenerative diseases like osteoarthritis at a very young age. Fat persons are more prone to varicose veins. Varicose veins are an indication of slow blood circulation. As the cholesterol is generally high in the blood of fat persons, this high cholesterol causes stone formation in the gall bladder.

Also very important are the psychological effects of being overweight. For Chijioke, he has had to change schools twice as a result of bullying and teasing from his colleagues. Playing with his peers has always been a problem as he finds it hard to keep up with their pace during physical activities.

Fat people are often made targets of fun, gossip and ridicule among friends and in the society. As a result of this, many of them develop an inferiority complex or suffer from other psychological disorders.

As dangerous as the risks are, obesity among children is on the increase. The question is why are children of this generation fatter than ever?

“Some children have breakfast, lunch and dinner in a fast food restaurant,” she said. “In between meals, they take chocolate, soda, biscuits and cake. When this piles up in their body for too long, the resultant effect is an overweight child.”

Another teacher, Gbemisola Daniel believes that the increase in obesity among children is due to parent’s neglect of their children’s diet. “Parents of these days are too busy to care about what their children eat. A lot of children are eating processed foods like noodles and canned food which increases their weight.”

“Schools are not helping either. If you see what some of them offer their children for lunch, you won’t be surprised at their weight. Most of the ones that give the children food don’t give them healthy meals and they don’t encourage the children to eat healthy.”

However, Dr Jokotola says that other than unhealthy diet, inactivity among children is a major cause of obesity.

“Children of these days don’t exercise,” he said. “Once they come back from school, they plant themselves in front of the TV and stay there till evening. They don’t move their body, they don’t work at home. You see some schools with tiny compounds where there is no opportunity for children to run around and play. The children don’t go to the park either to run around, they don’t run errands. This sort of inactivity causes them to add much weight.”

Is Child Obesity the Parent’s Fault?

Who then takes responsibility for obesity in children? Is it the parents? Most often, children start off with having ‘baby fat’, but it doesn’t always disappear.

“You can’t blame the parents. Some children just have fatness in their genes,” says Patricia Uti, a mother of two.

Another parent, Aisha Ahmad, is of the opinion that parents should not be blamed for what their children eat in their absence. “Sometimes, you teach your children good eating habits, but you cannot be responsible for what they do when you’re not around,” she said.

However, some people believe that obesity in children is the fault of the parent. For this group of people, children are supposed to be under their parents’ care, and so everything they do should be monitored.

“If we are to be true to ourselves, most cases of childhood obesity is caused by parents who don’t regulate their child’s eating habits,” said Femi Samuel. “If a child is too fat, it is 100% the parents fault. Parents should be held accountable for their child’s eating habits. Some people might deceive themselves and say it’s the genes or baby fat. But if you train your child from a young age to eat healthy, that child will eat healthy for the rest of his or her life.”

For Folake, she feels she is to blame for her child’s weight and is very upset about this.

“When he was younger, I thought it was just his genes at work. His dad is quite big so I thought he took after him. But he demanded for more and more food, especially chocolate. Sometimes when I look at him, I feel if I had been more resistant to his demands for junk food, he would be slimmer than this. I thought he was still a baby so I indulged her a lot, but his demands haven’t stopped. Now he is on a diet but it’s not working.” (Bellanaija)

What do you think about the rise in childhood obesity in Nigeria? Are Nigerian parents or the increase in the number of fastfood restaurants in our country to blame? What can we do to change this situation?