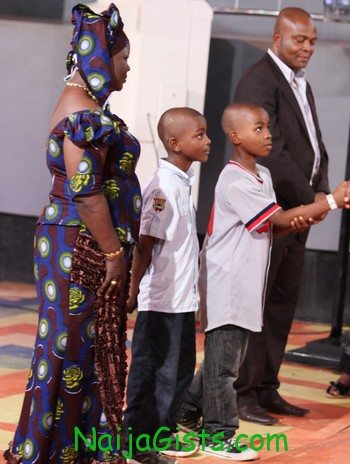 According to a report from the Vanguard, it has been endless celebration for the family of Mr. and Mrs. Remigius Ikwuazu since they were reunited with their stolen children— three-year-old Ugomma and one and a half years old Munachi. naijagists.com

The two children were among the three stolen on their way home from a 7.30am mass at Saint Mulumba’s Catholic Church, Owerri. However, the third child, three-year-old Uchechi Amatalam, is still missing.

Clutching her two children while narrating her experience to Vanguard, Mrs. Perpetua Ikwuazu said her husband hurriedly went to the Police headquarters, Owerri, on hearing that some children had been found, but came back home disappointed.

She said: “At 8pm of same day, the police came knocking on our door. They requested that we identify the baby in their patrol van. Behold, it was Ugomma. We were disturbed that Munachi was not there.”

A very competent police source revealed that while Munachi was recovered from Enugu, Ugomma was found in Onitsha. The source said Police were still working on getting the criminal gang that abducted the children.

This is more than any Chritmas gift. Congrats to the happy parents

Boko Haram: We Lost 3 Members, Many Are Still Ready To Die
Child Obesity in Nigeria: How To Combat It