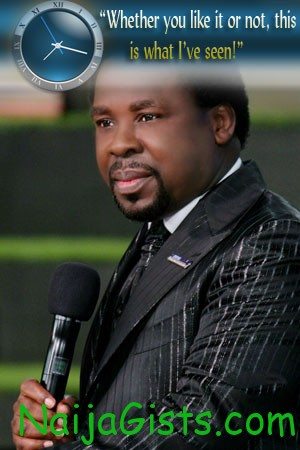 The politicians allegedly plans to hijack the National Day of Prayer by inviting TB Joshua without the consent of the custodians of the day, church leaders said yesterday

Intercessors for Zimbabwe, an inter-denominational church prayer movement which organises the National Day of Prayer told a Press conference in Harare yesterday that some pastors, along with some politicians Nicodemously invited TB Joshua to what should be a purely Zimbabwean affair.

“We don’t know why these people have done it outside the board mandated to do it. This is our concern. It’s like hijacking the event,” said Pastor Nedson Shoko who is part of clergymen behind the National Day of Prayer. “We wanted to book the National Sports Stadium for the National Day of Prayer but we were told that it had already been hired by some people where the guest of honour would be TB Joshua.“We were anxious to know who these people were. Upon inquiries we discovered that it was a consortium of pastors who were behind it,” said Pastor Muringani. He said those planning a parallel process were confusing believers in the country.

“We have been distributing fliers and each time we get to a place we are asked about TB Joshua. We have nothing to do with TB Joshua because we do not need a foreigner, that is why it is called National Day, meaning it is for Zimbabweans,” he said.

“IFZ does not subscribe to the so-called Prophet TB Joshua and his teachings and has not invited him to its National Day of Prayer on the 25th of May 2012. This is a day meant for nationals to gather to pray for the nation.”On the day, said Pastor Chimbambo, they would pray for various issues affecting the country.“We will pray for peace, education, health and elections,” he said.