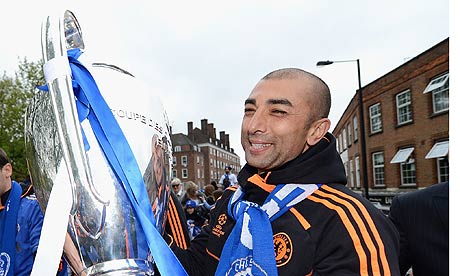 Here is a detail message about Roberto Di Matteo sack:

The team’s recent performances and results have not been good enough and the owner and the Board felt that a change was necessary now to keep the club moving in the right direction as we head into a vitally important part of the season.

The club faces a difficult task ahead in qualifying for the knockout
stages of the UEFA Champions League as well as maintaining a strong
challenge for the top of the Premier League while competing in three
other cup competitions. Our aim is to remain as competitive as possible and challenge strongly on all fronts.

The owner and the Board would like to thank Roberto for all he has
done for the club since taking over in March. Roberto helped guide us to an historic Champions League victory and a seventh FA Cup. We will
never forget the huge contribution he has made to this club’s history
and he will always be welcome at Stamford Bridge.(Source: The Times UK)

Chelsea fans,  are you in support of Roberto Di Matteo’s sack?