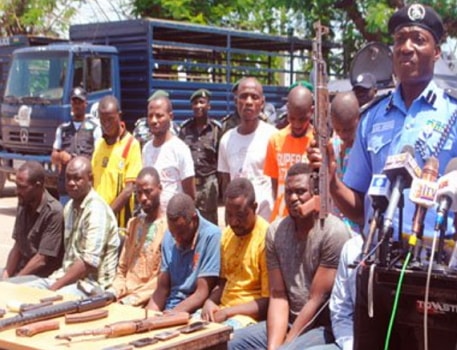 Some suspects arrested in connection with the bloody Offa robbery that claimed the lives of many on the 5th of April 2018 confessed over the weekend.

See their confessional statements below:

“I’m the Chairman of Liberation Youth Movement (Kwara South). We are the Senate President’s boys. We work for him at Kwara South. We are the ones that hold Kwara South for him. We have three senatorial districts in Kwara State; there are some people in Kwara North and Central but we control the South.

“We have been working for him since when he was the governor of Kwara State. When he was in PDP.

“We mobilise for him and we are the ones that do political arrangements for him. For example, where we cannot win, we mobilize people and make ‘dabaru’ arrangement there. We scatter elections if we don’t win.”

“Saraki is the one that arranges everything for us. For example, this car (Lexus SUV) was given to me by His Excellency Governor Abdulfatah Ahmed through the Chief of Staff of Kwara State as a gift from the leader Senator Bukola Saraki. I participated in Offa robbery and I took the Lexus Jeep to Offa.

“The Senate President and the Governor of Kwara State – we have been their political thugs. So, that was what encouraged us to do what we did.”

“We got our weapons through one dismissed Police officer Michael Adikwu. He came with ammunition. That fateful day, it was, Arrow, Alex, Stand Well Well and Niyi. It was five of us that went. We took off from Ajase Ipo with another Mercedes Benz to Offa. When we got to Offa, I positioned everybody but I stood at Total filling station. When we got there, we met Michael Adikwu who came in one Audi car. He brought out five AK47 from a Nissan vehicle.”

“They did not send us for the robbery but because we are their political thugs, that was why we did what we did.”

“It is the Chief of Staff to Kwara State Governor that gave us guns for political thuggery but he was not aware we were going to robb with them.

“We the youths of Nigeria should not allow ourselves to be used. We should not allow anybody to deceive us with anything. There is nothing out there. They are only deceiving us with stipends. My fellow youths, I am begging you in the name of God.

“I cannot tell you how much we got from Offa robbery because all we got was kept with Michael Adikwu. We did not share it immediately because he said if we did, we would be caught by the Police.”

Ogunleye, a graduate of EKSU said:

“I went to the same school with Akinnibosun. My involvement in Offa robbery was that our leader, Ayoade introduced the robbery to me and I later spread it to my two mechanics; Stand Well Well and Niyi.

“I killed the two people out of fear because I was being disturbed when the whole thing (robbery) was going on.

“I was disturbed by Michael Adikwu because he was shouting that the Nigeria Police dismissed him, took his job from him and that we will do them ‘Shege’. That was the word he used.”

“It was Michael that taught us how to use guns. A day to the robbery, he was teaching us in a bush at Ajase Ipo.

“I don’t know how long it took Michael but it was three days to the robbery that I got to know about it through Akinnibosun. “

Abraham a mechanic from Oro Irepodun who killed 5 people on the day of the robbery said:

“I killed five people in Offa.”

“While we were on operation. We were outside the bank and as the operation was ongoing, the people were stoning us. They were shouting thief thief and kept on stoning. One of the stones hit me and so I got angry and decided to shoot them.”

“I am a mechanic who specialises in Japanese motors. They told me that they wanted to explain something to me and when I met them, they told me that we were going to rob.

Ogundiran, a mechanic from Oro said one of the suspects, Ogunleye was his customer

“They brought a car to me to repair, it was while I was repairing it that they briefed me on what they wanted to do and I decided to follow them. I was told we were going to share whatever we make from the operation but we ended up with nothing. I only killed two people.”