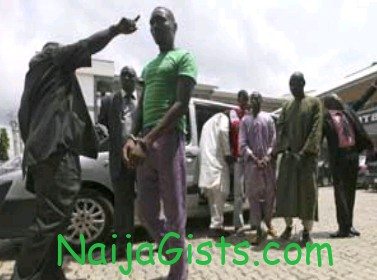 The National Assembly on Thursday agreed that any terrorist act that results in the death of another Nigerian would carry a death penalty.

This is contained in the report by the conference committee of the National Assembly that harmonised the different versions of the amendment bill passed by both chambers.

The Terrorism (Prevention) Act 2011 (Amendment) Bill, 2012 was passed by the House of Representatives on October 11 and by the Senate on Wednesday, October 17.

Presenting the committee’s report on the floor of the Senate on Thursday, Chairman, Senate Committee on National Security and Intelligence, Senator Mohammed Magoro, said, “Clause 2 amends Section 1 of the Principal Act, which deals with ‘prohibition of acts of terrorism’ in general.

“Section 1(2) of the House’s version states that “a person or body who knowingly in or outside Nigeria directly or indirectly willingly does, attempt or threatens any act of terrorism…commits an offence under this Act and is liable on conviction to a maximum of death sentence”.

The committee adopted the Senate’s new section 17 which provides a minimum of 20 years imprisonment for act of conspiracy, whereas the House had recommended life imprisonment.

Both chambers also agreed to a new section 18 to a life imprisonment for aiding and abetting acts of terrorism, though it was moderated by a clause which recommended 20 years where the act was not committed.

However, the Senate could not adopt the report on Thursday because some signatures of members of the committee were missing.

Magoro was asked to return the document for members to endorse it before it would be passed.

Meanwhile, security experts say the absence of a coordinating authority for the counter-terrorism fight may hinder the efforts of security agencies to stop terrorism in the country.

They also believe that the amended bill on terrorism passed by the National Assembly was politicised and lacked the bite the law enforcement agencies need to prosecute terrorism offenders.

A senior security officer said, “The implication of this is that there is no central coordinating authority as the various security agencies would not submit their operations, intelligence and findings to a central authority as it obtains in other countries fighting terrorism.”

Also a former Security Adviser to River State Government, Chief Sara-Igbe said the anti-terrorism bill was not watertight enough, adding that until the loopholes in the law were closed through an amendment, the counter-terrorism war would continue to be frustrated.

He called on President Jonathan to send an amendment quickly, saying the lawmakers who passed the bill were “novices who don’t understand the dynamics of terrorism.” [Source]