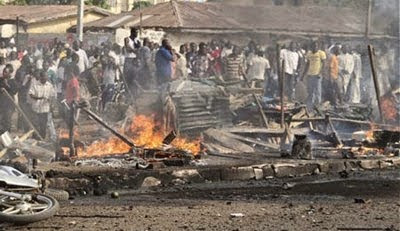 15 people were killed and 47 others injured in a suicide bomb attack on a crowded market in Damaturu on Sunday, Mr Toyin Gbadegeshin, the Police Public Relations Officer in Yobe, confirmed.
Gbadegeshin, who made the confirmation to newsmen in Damaturu, said that the bomber, a 10-year-old girl, detonated the explosive device at the gate of the market, killing herself and 14 others.

He said, “a female suicide bomber, aged about 10 years, detonated the explosive device at a crowded main entrance of the popular Sunday Market, killing 15 people, including 10 females and five males, while injuring 47 others.”

He said five other units of undetonated explosives were recovered at the scene of the explosion.
The police spokesman said that suicide bombers used mortars similar to those recovered from suspected bombers on the Maiduguri-Damaturu highway on Monday.

Three policemen and five suicide bombers were killed in the Monday incident.
Gbadegeshin urged the public to be cautious and remain observant of suspected persons, bags and movements around their environments.

NAN recalls that 23 people were killed in two separate suicide bomb attacks in Damaturu in the last one week.