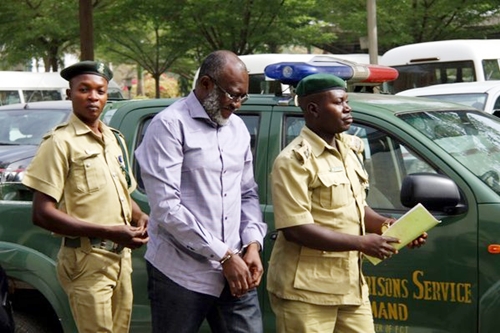 A witness in the Economic and Financial Crimes Commission’s (EFCC) money laundering case against the spokesperson of the Peoples Democratic Party (PDP), Olisa Metuh has revealed how he allegedly used funds received from former National Security Adviser (NSA), Sambo Dasuki to purchase a property in the exclusive Banana Island area of Lagos State.

The revelation was made today, February 9, 2016, by Junaid Sa’id,
The PDP spokesperson is said to have used bout N500m out of funds received from Dasuki, who’s also being tried for corruption, to buy the property.

“Investigation revealed that after payment of N400m by ONSA, a total sum of N366m was paid into the same account by one Kabiru Ibrahim, who also paid in N150m; Capital Field Investment Limited paid in N91m, and one Eyitonye, paid in N82m,” Sa’id said according to The Cable.
“These funds formed the naira equivalent of $2m, which the first defendant [Metuh] gave to one Nneka Ararume in cash. Investigations revealed that all this money was used for PDP campaign activities and for personal use by the first defendant.

Another sum of N5m was discovered to have been paid to Chief Kema Chikwe, and the sum of N50m was found to have been transferred to a joint account of the first defendant and his wife.

“The sum of N500m was also discovered to have been transferred to Daniel Ford International Limited in two tranches of N200m and N300m for the purpose of buying landed property at Banana Island, Lagos, by Metuh,” he added.

Metuh was previously imprisoned at the Kuje Prison on the charges but is currently free on bail.