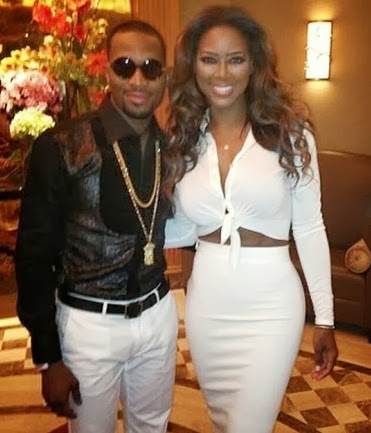 Nigerian singer Dapo Oyebanjo aka Dbanj has been hired to star on a popular American show.

Real Housewives of Atlanta star, Kenya Moore who travelled to Nigeria for valentine last week has employed D’banj to feature on the popular reality TV show as her boyfriend.

According to MTO sources, Kokomaster will be paid 40 thousand dollars to feature on the show.

To get the money, D’banj will have to pretend as Kenya Moore’s African Prince.

This is how MediaTakeOut is reporting it:

We spoke exclusively to a Bravo insider that told us that Bravo has just set up taping for the reunion everyone is scheduled to attend, each lady and their husband.

And we’re told that while Porsha does not have a guest/husband, Kenya Moores will be bringing a guest. Word is she wants to help secure her spot for another season so she has in fact hired an African prince.

According to another person close to Kenya, she has contracted to bring in Nigerian singer D’Banj to the reunion. And by “contracted” we mean a business deal . . . she has hired him to pretend to be her boyfriend. D’Banj is a popular singer in Nigeria, and he and Kenya have done appearances together before – but they are not in any kind of relationship . . . and he did not buy her any type of car.

In addition to the 40K, Kenya Moore promised to promote Dbanj to her American audience if the contract becomes successful.