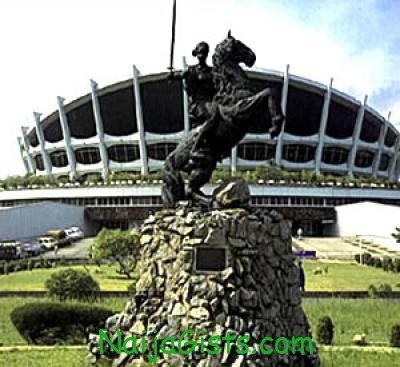 A dead body was on Thursday discovered at the National Theatre, Iganmu, Lagos.

The deceased was identified as Paul Omibi, 30, whose contact address could not be ascertained was found dead under a tree within the precincts of the National Theatre.

Although the cause of his death could not be ascertained, Omibi was found dead sitting on a plastic chair under a tree.

A polythene bag found beside the deceased contained a Lagos State Laboratory Service request form dated November 23, 2011, that showed that the deceased was to undergo a laboratory test for an ailment.

The form, with hospital number 7830, was jointly signed by one Dr Gbadamosi and Dr Hodonu, consultant and the laboratory doctor respectively.

Among the items found in the bag were a prescription note, a tea cup, clothes, comb, tooth brush and tooth paste.

Emeka Daraojemba, a passerby, said Omibi was always sitting under the same tree, and described the deceased as a polite man who “humbly asked for alms”.

“Each time I saw him under the tree, I noticed that he was always coughing,” he said. “I was almost going to ask him the last I saw him sitting there what was his name and the problem. Initially, you will think he was insane, but I do not think that his problem was insanity. I think his problems were frustration and lack of care.”

The Officer-in-Charge of National Theatre Police Post, Adeshina Eletu, said that efforts were being made to remove the corpse to public mortuary.