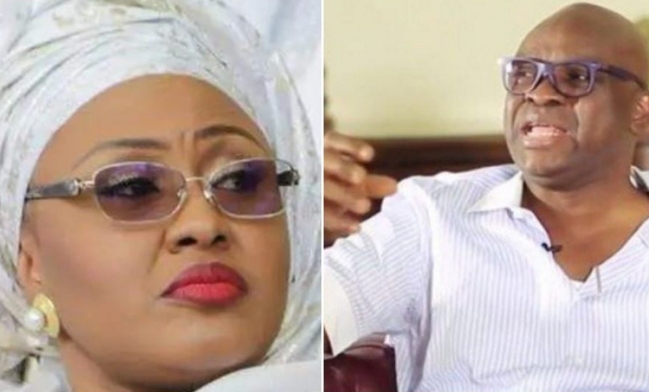 First Lady Aisha Buhari has described the statement by Ekiti State Governor Ayo Fayose which fingered her as an accomplice in the famous Halliburton bribery scandal that landed former U.S. lawmaker, Williams Jefferson in jail as “very wild and unfounded.”

She threatened to drag Fayose to court if the statement was not retracted within five working days. The letter emanated from the chamber of Mary Ekpere and Co.
The letter signed by Ismaila Alasa and Mary Ekpere was entitled: “Demand for unqualified retraction of the false statement published by you in various media on the 20th of June, 2016, and subsequent dates regarding our client, Her Excellency, Mrs. Aisha Buhari the wife of President Muhammadu Buhari, GCFR.

“The said statement which was caused by you and your agents to be widely circulated and published in various media platforms: print, electronic and online on 20th of June, 2016, contains very wild, unfounded and false allegations and imputations against the person of our client.

“Take notice that unless you and your agents meet our humble demands within five working days of the receipt of this letter, we shall take all necessary steps within the contemplation of the law to seek redress for our client.”

The governor had on Monday distributed a statement, which contained excerpts of court documents sourced from the United States Department of Justice Website allegedly indicting Mrs. Buhari in the sordid

Meanwhile, a chieftain of the Peoples Democratic Party and key participant in the bribery scandal, Oyewole Fasawe, described Fayose’s accusations against Buhari’s wife, as “fallacious, baseless, misinformed and defamatory”, saying she was not connected “in any way” to the transaction,

“We were the ones in government, and she was never a member of our party or my business associate. So, how could she have been involved in the first place,” Mr. Fasawe said.

Fasawe advised Fayose and his handlers to desist from “this unprovoked attack and unsolicited defamation to the person of Mrs. Aisha Buhari,” adding that “no one should hide behind immunity clause to trample upon the rights and reputation of others with impunity.”