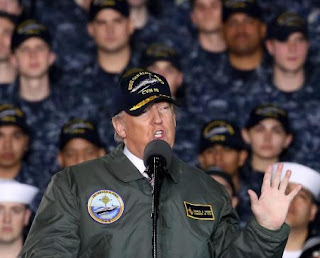 Transgender individuals will not be allowed to serve in the U.S. military “in any capacity,” President Donald Trump said on Wednesday on Twitter.

The decision would reverse a policy announced in 2016 under former president Barack Obama.

“After consultation with my generals and military experts, please be advised that the United States Government will not accept or allow transgender individuals to serve in any capacity in the U.S. Military,” Trump wrote in a series of tweets.

“Our military must be focused on decisive and overwhelming victory and cannot be burdened with the tremendous medical costs and disruption that transgender in the military would entail.”

Then-defence secretary Ash Carter said in June 2016 that transgender individuals could serve openly and would no longer be discharged or separated from the military solely for that reason.

The all-volunteer U.S. military needed to be able to recruit the best people available without “barriers unrelated to a person’s qualification,” Carter said at the time.

Buhari Has Recovered! See His Latest Pictures Taken In London UK Today
Saraki Withdraws Charges Against Teacher Arrested For Insulting Him On Facebook