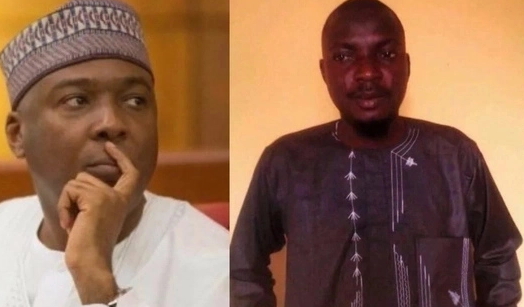 July 28, 2017 – Saraki Withdraws Charges Against Teacher Arrested For Insulting Him On Facebook

Baba, a teacher at LGEA School, Olorunlana in Moro Local Government Area of Kwara was alleged to have through his Facebook postings been inciting the public against Saraki.

The criminal charges were filed following a complaint by Alhaji Jimoh Adesina, Chairman, Kwara South Chapter of the APC to the Chamber of S. I. Solagberu and Co, Ilorin.

Adesina, accused Baba of printing or engraving matters on his Facebook wall known to be defamatory.

He also alleged that Baba’s postings was capable of causing disaffection and disparaging against Saraki.

However, the matter took a dramatic twist as counsel to the complainant, Sikiru Solagberu, said he had filed an application before the court seeking to withdraw the charges.

Solagberu read a letter he received on July 26, instructing him to withdraw the case against the accused.

The lawyer cited section 248 of the Criminal Procedure Act, Cap 41, Laws of the Federation 2004 to support the application for withdrawal.

He said the instruction of the complainant to withdraw the case was as a result of intervention by well meaning Nigerians, including Ilorin Emirate Traditional Council, leaders of the various communities in the state as well as party loyalists.

Solagberu, urged the court to grant his application.

Responding, counsel to the accused, Mr Sambo Muritala, said his client would ordinarily not object to the complainant letter to withdraw.

Muritala, however, submitted that in a situation of non compoundable offence, it is safer for the complainant’s counsel to make proper application before the court and support it with an affidavit.

According to the counsel, coming by way of proper application and affidavit will demonstrate the wish of the complainant to withdraw the charges saying the application was an abuse of court process.

Replying to the accused counsel’s submission, Solagberu argued his application was not an abuse of the court’s process adding that since matter was not a civil action there was no need of deposing to an affidavit.

Solagberu added that the complainant’s letter before the court has satisfied the conditions for withdrawal of cases of this nature.

“If a party says he wants to withdraw in a criminal case, the court should use its instrumentality to assist the parties to withdraw.

The Magistrate, Ahmed Dasuki, later adjourned the matter to Aug 3 for ruling on the application.

Continue Reading
You may also like...
Related Topics:insult, saraki, teacher