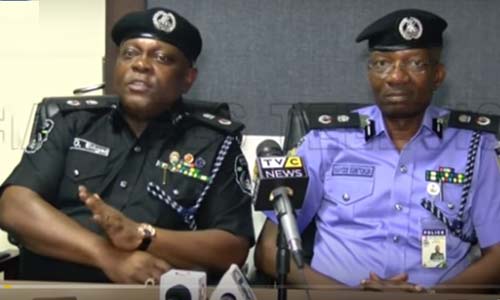 The handing over couldn’t hold due to an order from the police headquarters in Abuja.

Earlier, the reporters were told that the event scheduled for 1:30 pm has been shifted to 3 pm.

Few minutes past 3 pm, there were jubilations in the Conference Hall where the Divisional Police Officers (DPOs) and the Area Commanders, waiting for the briefing by the Acting CP, converged.

Not quite long, Edgal, who briefed the reporters in company with Egbetokun said: “Gentlemen of the press, are you here for the handing over and taking over? Are you here because you like me or you are eager for me to leave? Well, there is a directive that the status quo should remain till further notice.”

Edgal told reporters that there is no change of guard for now, as he still remains the state Commissioner of Police.

“I am sure that Kayode Egbetokun is an old timer in the command. Our first job as police is order and directive; we were about concluding the handing over and taking over procedure when we were instructed by our bosses from Abuja to suspend action for now. So, there is no change of guard for now. Of course, we will keep in touch of latest development,” he said.

He did not entertain any question.

Egbetokun, who came with his personal effect and his personal staff, left the command, saying: “We are government agents and we are always taking directives.”

As Edgal was leaving for Abuja to meet with the Acting Inspector-General of Police, (IGP), Mohammed Adamu, there was gunshot salute.

The policemen attached to Edgal’s convoy shot four times into the air to celebrate the “good news.”

Continue Reading
You may also like...
Related Topics:cp, hand over, lagos, police