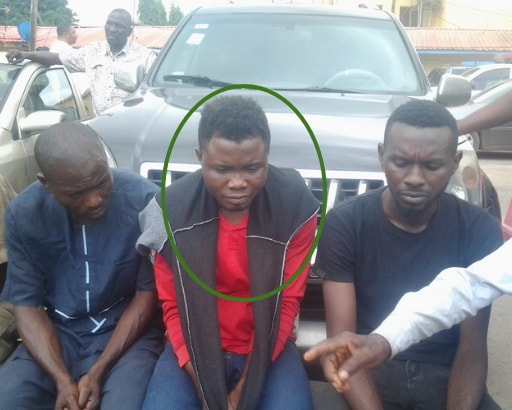 The SUV with registration number, LSD 735BP, was recovered in Ogun State.

The police said that Ogunmola made away with the vehicle and gave it to one Femi who claimed to a Mechanical Engineering undergraduate of the Kwara State University. He then sold it to Mr. Ibrahim for N50,000.

However, the three suspects were arrested by the operatives of FSARS and they recovered the vehicle at Ijebu-Ota in Ogun State.

This was confirmed by the Lagos State Commissioner of Police, Mr. Imohimi Edgal, at the State Command where the suspects were paraded with the vehicle as exhibit.

The police boss said that on 18th July, 2018, the owner of the vehicle reported that Mr. Ogunmola made away with the SUV with his personal documents inside. He said that based on the report, the operatives of FSARS were detailed and they moved into action which led to the arrest of the driver in a hideout in Ikorodu area of Lagos.

He said that when the driver was arrested, he confessed claiming that the devil tempted him to do so.

CP Edgal said that the three suspects were in police custody and will be charged to court after the conclusion of investigations.

The owner of the SUV, Mr. Mayaki expressed delight about the diligent work by the police and said that he had learnt his lesson from the whole incident.