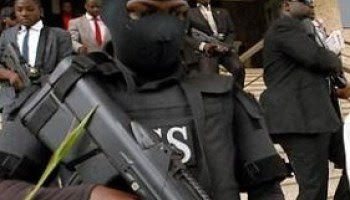 The Department of State Services (DSS) says it has made several arrests of elements posing serious threats to national security.

In a statement by its spokesman, Tony Opuiyo, the DSS noted that following offensive against kidnappers and other criminals, the Service apprehended the trio of Abubakar Musa, Ismail Musa and Suleiman Mainarara on 29th November, 2016, at Aduwawa in Benin city, Edo State.

“Prior to their arrest, they were members of a kidnap gang that terrorised commuters and residents of communities along the major highways between Edo and Kogi States.

Similarly, on 30th November, 2016, one Ibrahim ADAMU and three of his associates namely; Umar ABUBAKAR, Ibrahim SALISU and Abdullahi ABUBAKAR, were arrested at Ibilio village in Edo State.

The quartets were part of a larger gang that specialized in the kidnap of people along the Edo-Kogi corridor.

“On 20th December, 2016, at Katsina-Ala town in Benue State, another gang of suspected kidnappers comprising one Ernest BENZE, Terkura TYOKISHIR alias MPOTO, and Anun AONDONA, identified as members of the Terwase Akwaza kidnap syndicate, were arrested for their complicity in kidnap incidents in the State. It would be recalled that the Terwase gang is known for its notoriety and credited with various dastardly and violent acts in the State.

“Furthermore, one Usman Sanusi MUSA aka KEKE, a notorious kidnap kingpin was intercepted by the Service on 15th December, 2016, at Sabuwar-Kaura village in Doguwa LGA, Kano State.

MUSA is a high-profile criminal who, in conjunction with other criminal associates of his gang has been terrorizing residents and communities in Bauchi, Kaduna, Kano and Plateau States.

The trio have perfected plans to carry out series of coordinated attacks with Improvised Explosive Devices (IEDs) in selected States of the North-West zone in the month of November, 2016 to disrupt festive activities during the end of year and the new year of 2017.

“In the past few weeks, a new criminal gang which specializes in robbing visiting foreign residents/customers of luxury hotels has been uncovered, in Abuja, FCT. For instance, on 5th December, 2016, the gang robbed an expatriate in a high brow hotel in Abuja and carted away his money and other valuables.

“However, acting on actionable intelligence, and with the support and cooperation of sister agencies and the hotel management, the Service arrested one Ikechukwu OBADLEGWU and Ikechukwu Joseph EKE. While OBADLEGWU carried out surveillance on potential targets for the group, EKE is the kingpin and mastermind of the whole operation. Following this operation, the Service has successfully recovered almost all the stolen items.

“Also, at Gwaron Dutse, Kano Municipal, Kano State, Auwalu Abdullahi YAKASAI, a notorious fraudster was apprehended for allegedly defrauding Jaiz and Unity Banks of N100 Million and N50 Million respectively. The Service also arrested one Bashir SHUAIBU, on 5th December, 2016 at Tsamiya village, Gezawa LGA of Kano State for obtaining money from unsuspecting victims through threat messages. He was arrested while in the process of defrauding another victim.