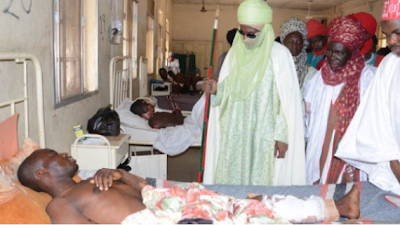 Kano’s Emir, Sanusi today visited the bloodstained Central mosque a day after it was bombed by suspected Boko Haram militants.

The attack as at last night killed 120 people  and injured 270 others.

In a 20-minutes visit to the mosque today, Sanusi ordered that the mosque be washed and cleaned.

Sanusi (pictured above) also visited victims of yesterday’s bombing at Kano School of Hygiene Gida, Murtala road in Kano. Most of the victims are in dire need of blood.

Sanusi said the attackers planned it in September.

“From all indications, they (attackers) have been planning this for at least two months,” Sanusi said as he arrived at the mosque straight from the airport. He did not give details on what information supported that assertion.

Hmmm how did he know it was planned back in September??? #food for thoughts