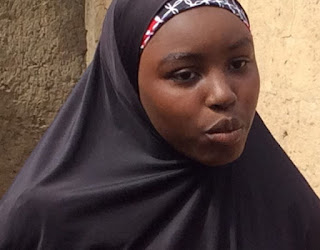 A survivor of recent Boko Haram attack on a school in Yobe state has narrated how she escaped from the deadly sect.

15-year-old Amina Mallam Usman who ascribed her escape to the grace of God prayed that God might protect her friends and mates and guide them back home.

Here is how she narrated her narrow escape:

“When Boko Haram came to our school, we thought they were soldiers because they dressed like soldiers.

“We ran, and then one of them called us. One of them asked me to come to the car.

“I got close to the car, and then one of them started laughing at me.

“I moved closer to them, thinking they were soldiers.

“I soon realized that they were not soldiers. As I made to run away, one of them tried to grab me. I dodged him but he got my hijab. I quickly removed my hijab and left him with it and ran away. I thought I was dead.

“They entered our hostel again, but some of us ran into the bush. I ran up to five kilometres and hid in one Fulani settlement called Miligia.