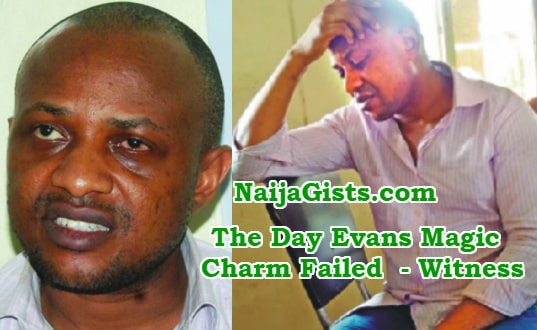 Testifying in his trial, Police Inspector Idowu Haruna said Evans never believed he could be arrested.

According to him, Evans exclaimed during his arrest: ‘Oh God! I never knew this day will come!’

He said Evans promised to cooperate with the Police by confessing to his alleged crime.

Haruna said Evans made his statement to the Police voluntarily and without duress or torture.

Led in evidence by prosecution counsel Dr Jide Martin, the witness said Evans’ statement was recorded on June 26, 2017 at 2 pm at the Special Anti-Robbery Squad (SARS) office in Ikeja.

He said Evans narrated how he and his accomplices kidnapped Godwin Okorafor.

A consultant radiologist from the Paramount Life Care Diagnosis Center, Samuel Oyemakinde, in the first charge, tendered a medical report and an X-RAY result showing that a kidnap victim, James Uduji, sustained a gunshot wound.

Oyemakinde, who was subpoenaed to give evidence, said there was a linear foreign body lodged in the victim’s upper left lung zone.

Justice Akintoye adjourned until November 2 for continuation of trial.