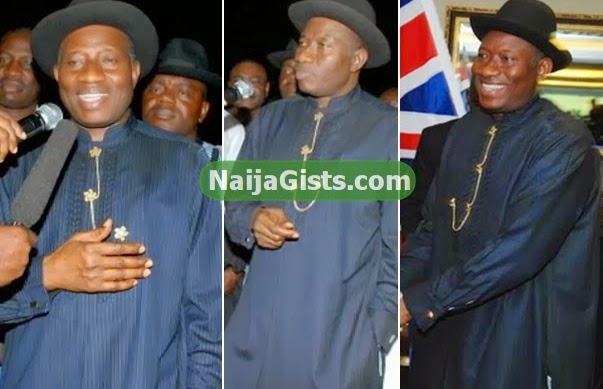 October 25, 2017 – Ex-President Jonathan To Appear In Court As Defendant In N400Million Criminal Suit Filed Against Metuh

An Abuja Federal High Court today again fixed October 31st  for former President Goodluck Jonathan to appear before it as a defendant witness in the N400 million criminal suit filed against Olisa Metuh.

Metuh, a former National Publicity of PDP is seeking the appearance of the ex-president to open his defence in the N400 million fraud suit brought against him by the EFCC.

Justice Okon Abang made the bench ruling when the ex-president was not in court to honour the subpoena of the trial court to testify.

“It is clear that His Excellency, the former President Goodluck Jonathan is not in court in compliance with the Oct.3 order of the Court of Appeal, Abuja.

“We have however, seen from the record that his absence could not have been his fault as the bailiff is unable to serve him with enrolment order to that effect.

“In the light of that, the matter is adjourned until Oct.31 to enable this service to be made. However, if serving personally fails again, he would be served by substituted means.

“After due diligence, the court would ensure that the law takes it course if the former president refuses to honour the subpoena,’’ he held.

Ruling on retired Col.Sambo Dasuki’s absence also, Abang held that the court was aware that Dasuki was in custody of the Federal Government.

He therefore, gave an order compelling the Director- General of the Department of State Service (DSS) to ensure Dasuki’s appearance in the court on the next adjourned date.

The judge held that the law frowned at subpoenaed persons who turned down the order to appear in court to testify in a matter for which such subpoena was issued.

Abang said a deliberate violation of subpoena carried jail term of not less than two months and a fine of N10, 000.

“Let me state here that this subpoena in question was not the contemplation of the court, rather the first defendant (Olisa Metuh) had applied for it. It was only issued by the court,’’ he said.

In a related development, Abang had struck out the application by the former National Security Adviser to be discharged as a defence witness in the trial.

The judge held that the application lacked merit and incompetent, adding that the court lacked the jurisdiction to entertain or review the pronouncement of the Appeal Court.

“From the argument of the applicant (Dasuki), it seems he is dissatisfied with the judgment of the Appeal Court, if this is so, he knows where to go, what to do, certainly not to come before this court.

“This is legal impossibility. This court has no such jurisdiction. I agreed with the prosecution counsel who said it will amount to judicial anarchy if the application was granted.

Abang had in his bench ruling on Oct.24 held that both the former President Jonathan and the former NSA should appear before the court on Oct.25 as defendant witnesses to Metuh.

The Court of Appeal, Abuja, on Oct.3 granted an application filed by Metuh, to compel the duo to testify in the N400 million fraud charge brought against the applicant.

Continue Reading
You may also like...
Related Topics:court, jonathan, metuh