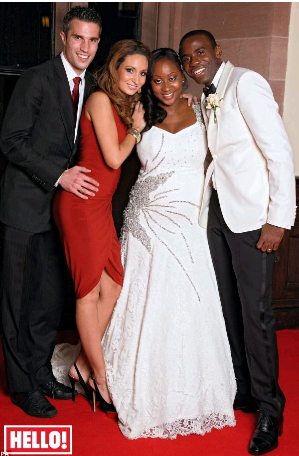 24-year-old Footballer Fabrice Muamba who had an heart attack over 7 months ago has made a joyful ending to his ordeal. naijagists.com

Muamba had proposed to 27-year-old Miss Magunda just a month before his cardiac arrest, on Valentine’s Day.

The distraught young woman became a constant presence at her fiance’s bedside, and by August he had recovered, although his playing days are now behind him.

Their nuptials were attended by Premier League star Robin Van Persie and his wife, who posed with the happy couple for the latest edition of Hello! magazine.

Muamba told the magazine: ‘This year has been a difficult one but, to me, marriage is the happy ending.’

‘I just feel elated for Fabrice and Shauna, and so honoured to be here to celebrate with them.

‘The cardiac arrest had a big impact on everyone in football, and we all lived the moment as Fab recovered in hospital.

‘Everyone is so relieved and happy for him and Shauna.’