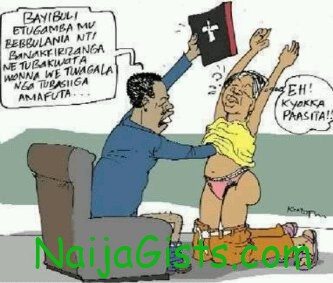 June 13, 2012 – A fake Anambra based pastor was arrested on Tuesday for allegedly raping a girl, 11, while conducting witchcraft deliverance for her. naijagists.com

The pastor, whose church is situated at Tasia Road, Inland Town, Onitsha, was said to have told Chioma Onyeji, mother of the rape victim, who was in the church for a spiritual programme to leave the girl behind for some days in order to expel the evil spirit in her.

He further said the young girl possessed demonic spirit and witchcraft and consequently insisted that the girl should stay back with him.

Mrs Onyeji, who leaves in Asaba, Delta State, saw her daughter bleeding from her private part when she returned a few days later to pick her girl from the church and informed the police who immediately arrested the pastor.

Upon investigation, the girl told her mother that the pastor raped her three times after spreading white cloth on the floor.

The Divisional Police Officer (DPO) at the CPS, Onitsha, Abdul Yusuf, told journalists on Tuesday that he was not on seat, but a police officer, who did not want his name mentioned, confirmed the incident, adding that the pastor would soon be charged to court.

How can you leave your 11-year old female child with a male pastor? This woman is dumb.

Woman Attempts To Kill Herself, Husband
The State Of Mind