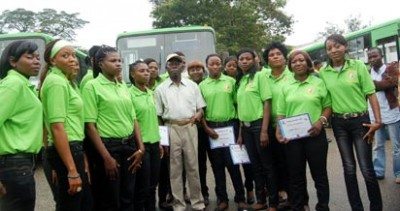 Nov 10, 2011 – The above pictured Edo state Female Intra City bus drivers were among the 59 that were trained for 3 months by the Federal Road Safety Corps, FRSC.

The very first set of female trainee drivers were welcomed with funfair by the people who are eager to contribute their quota in making the Comrade Bus a pleasurable ride for all.

Findings by , VM, indicated that the comprehensive training programme, was made up of two modules: The FRSC training modules for three months, initial driving skills development and driving methodology. Also, there was in-house apprenticeship training for four months and this was for confidence building, sharpening of their skills for practical operational efficiency and public relations.

Apart from using the scheme to provide jobs for the teeming army of unemployed youths in the state, Governor Adams Oshiomhole also used it to demonstrate his conviction that female drivers are more sensitive to the plight of commuters, unlike their male counterparts. The Governor is also of the conviction that this drivers’ scheme will go a long way in reducing the rate of accidents in the state.

Speaking during the passing out ceremony, Managing Director of the Intra-City Bus Service, Mrs. Edugie Agbonlanhor said: “It is expected that it will lead to high level service delivery and stem the tide of pilferage. We are also of the candid opinion that this development will become an enduring and sustainable employment strategy for the overall wellbeing and progress of the Intra City Bus Service”.

She said that from the reactions of the public to the new scheme, and the ever abundant prayers for the person of the Comrade Governor by the passengers, “we can conveniently say in our opinion and without any doubt that there is no area of governance and delivery of democracy dividends that has surpassed the impact and deep appreciation of the Governor by the masses, than the provision of the Comrade Buses”.

The public acceptability and popularity of the Intra City Service can be gleaned from available user statistics which show that within one year of commencement of business, the Comrade Buses recorded an average weekly turnover of 170,000 passengers and an average monthly turnover of 700,000 passengers with a total of about nine million passenger turnover in the period of October 2010 to September 2011, she said .

The commuter profile, according to Mrs. Agbonlanhor, ranges from students, market women, office workers, military and paramilitary ranks and officers, associations, religious bodies, top civil servants in the rank of Permanent Secretaries and the Comrade Governor, who often rides in the ‘Comrade Buses’.

However checks by VM indicated that the acceptability and patronage of the Comrade Bus by a large segment of the society has to do with the obvious advantages of the comfort, safety, availability and affordability, through low pricing which has brought price stability to the system, delivering the masses from the whims and caprices of greedy commercial bus drivers.

It was learnt that apart from being a viable source of employment generation to numerous Edo citizens, the Comrade Buses have also been deployed as intervention tools in emergency evacuations, when the lives of Edo people outside the state are threatened or at stake as in the recent cases of Edo Youth Corps members in Bauchi and Edo students in the University of Maiduguri.

Within a year’s period of its existence, the Comrade Bus project has apart from achieving the major objective and goal of alleviating transportation problems of the masses, also become a pacesetter among states that operate intra city bus services.

It is said to be the first to adopt the E-payment system to minimize cases of pilferage and the first in the country to train, employ and deploy female 42-seater bus drivers, which was the sole initiative of the Comrade Governor for women empowerment.

According to one of the female trainee drivers, Miss Ashuma Sarah: “In February, when this project started, it seemed to many as though it was a complete joke; that women who cannot drive a car would be taught how to drive a 42-seater bus. But today, what seemed impossible has turned out to be a huge success and something posterity will never forget.

“What the Comrade Governor has achieved is quite a feat which was borne out of perseverance orchestrated on the platform of intelligence and determination, giving credence to the fact that nothing is impossible.

“We feel very favoured to be part of the female drivers’initiative aimed at giving meaning to the girl-child. We feel very obliged also to continually put in our best to sustain this initiative and we pledge our absolute loyalty to this project and also promise not to fail you, Sir. You will not regret the funds spent on this project”.

The Governor disclosed that the initiative of the female trainee drivers of the Comrade Bus Scheme is aimed at ensuring gender equality, maintaining that no society can attain full potentials when a particular sex is restricted to certain jobs. He assured that with the training received by the female drivers, commuter’s safety is guaranteed.

Besides, the Governor had launched the Edo Traffic Management Agency, EDSTMA, to help reduce the carnage caused by reckless driving. While urging the traffic managers to be civil in their dealings with traffic offenders, he noted: “Even when an offence has been committed, such as wrong parking, we must be civil in our methods.

We must even wear a smile while being firm on the issue. The important thing is to keep our eyes on the board. I have seen elsewhere in the world where policemen do their jobs with a smile. While we must be firm, we must not insult people, we must not abuse people”.

The Governor warned men of the traffic agency to shun corrupt tendencies, saying anyone caught will be prosecuted. His words: “We are going to put private monitors with secret cameras to monitor the on-goings. If you are caught in extortion, we will take you to court and ensure that the rule of law prevails and you are brought to justice”.

While expressing the hope that the officers will take their work seriously, he noted that government has done a lot of work on building and expanding roads across the state as part of general urban renewal.

Earlier, the Commissioner for Transport, Mr. Victor Enoghama said recent statistics showed that a total 29,715 Nigerians were killed in road accidents between 2005 and 2010, while 118,993 of the victims suffered various degrees of injuries in accidents involving 53,000 vehicles.

He appealed to the Private sector to partner with the state government to develop the transport sector in the state.

What a man can do, a woman can do better