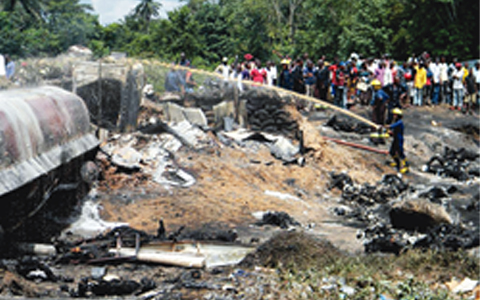 Some female students of Rivers State University of Science and Technology, RSUST, Port Harcourt, have been displaced, following a dawn fire, which razed one of the female hostels on campus.

The fire consumed the entire Hostel A2 bungalow, displacing official residents and several squatters in over 30 rooms with most victims losing all their belongings.

Miss Wosa Prisca, a Foundation Education student, one of the victims of the inferno, told Vanguard that “many of us left early for 6am lectures, only to be told moments later that our hostel was on fire. It was too late when those in my situation got back.”

Miss Good Isiah, a 100 Level Computer Studies student, an orphan of Ogoni descent, who lost all her belongings, was inconsolable over her vital documents, which she lost to the fire.

In a preliminary investigation, South-South Zonal Team Leader, Search and Rescue Unit of National Emergency Management Agency, NEMA, Mr. Fortunatus Anyanwu, told Vanguard that the fire started when a camp cooking gas exploded on an occupant in an undisclosed room while lighting the cooking appliance.

The NEMA official, however, explained that no casualty was recorded in the incident, but there were indications that the student, who lit the gas cooker may have sustained injuries.

Other affected students, who spoke on condition of anonymity, said that the gas cooker exploded in Room 28 of the affected block and spread fast to the entire building.