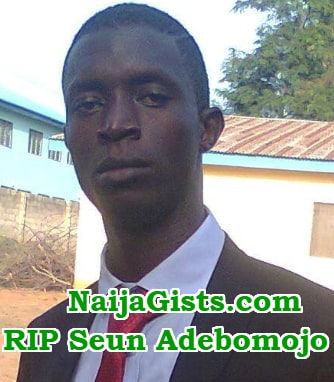 Corpse Of Oluwaseun Adebomojo, FRSC Officer Killed By Hit And Run Driver In Abuja Seized; Family Cries Out For Help

The relatives of late  Adebomojo Oluwaseun, an official of the Federal Road Safety Corps (FRSC), Federal Capital Territory Command, who was killed by a hit and run driver on Sunday, 16th December 2018 while on official duty has called for the release of his remains for burial.

The elder sister to the deceased, Mrs Adeola George-Ogosi, who spoke on behalf of the family in Ado Ekiti, on Tuesday called on well-meaning Nigerians to implore to the FRSC to release the body for burial in order to relieve the trauma currently experienced by the entire family.

According to her, “Since the breaking of news about Seun’s death, the whole family has been in sadness, his mother and wife are currently on the hospital bed and doctors are still trying to revive them from the shock.

“We were told by the FRSC that it has completed his autopsy yesterday, every necessary document has been filled and we are expecting his body to arrive today, only to be told that there is an order from above that his body should not be released.

“This has caused us another trauma. We are appealing to well-meaning Nigerians to speak to the FRSC.

“We were told the driver escaped but the vehicle had been impounded, however, what has happened can’t be reversed but we must forestall the occurrence of another sad event in the family, which might be occasioned by the delay currently experienced in the release of his body by the Road Safety. FRSC, please release my brother’s corpse.”

Mrs George-Igosi noted that every effort to convince the FRSC on the need to immediately release the body of the deceased and prevent imminent challenges to the family has been fruitless.

However, efforts by reporters to speak with the FRSC official who has been relating with the family proved abortive, as his phone was switched off.