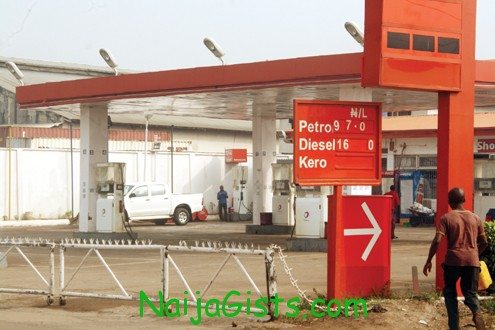 Several Petrol stations in different parts of Ogun State, Southwest, Nigeria, are currently selling fuel from prices N100 – N120. Many even claimed they are out of fuel to sell.

According to PM, in Ijebu Ode, Ijebu Igbo, Itele, Expressway, Oke Owa and other towns around Ijebu Ode, long queues of motorists have been forming at the three stations that are selling the product at the official price of N97.

Investigations in Sagamu and its environs show that many people have been buying the fuel in jerrycans and kegs. According to those that spoke with our correspondent, they have to pay extra money to petrol attendants before they can sell to them in the kegs.

According to the source who is a manager in one of the filling stations, but pleaded anonymity, “My boss just came back from a meeting they (marketers) went and directed that the price should be increased to N120. My findings show that most filling stations around us here down to Ipokia are selling for N120 and N130.”

With the present situation in some parts of the Gateway state, most motorists have resorted to travelling to Abeokuta, the capital city to purchase fuel at the NNPC Mega station and some other stations which are still selling at the official rate of N97.

Transport fares have gone up by at least 20% and commuters that cannot afford it have resorted to trekking to their destinations.